Creationist: If You Don’t Interpret the Bible Literally, There’s No Reason to Wear Clothes

It’s nothing new for Creationist Ken Ham to appear on Christian radio and proclaim that a literal interpretation of the Bible is the way to go. If Christians don’t take Genesis as fact, the rest of the Bible may as well go down with the ship.

It’s also not new for a Creationist to say gay marriage is an abomination because God created Adam and Eve, not Adam and Steve, and if you don’t believe Adam and Eve existed, how can you get away defending marriage as between one man and one woman?

But I’ve never heard the argument Ham made recently, which is that if you don’t take Genesis literally, then we might as well all be naked. 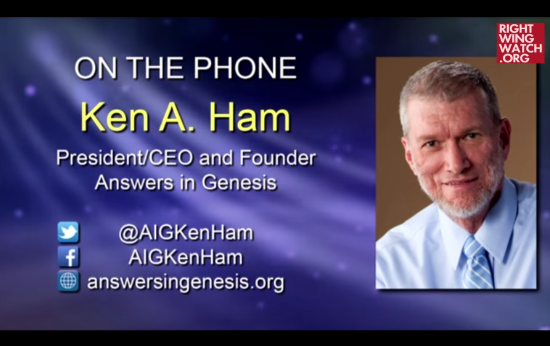 He cites a passage that says God created “garments of skin” for Adam and Eve. And… that’s it. That’s where clothing comes from.

[Ham] added that “the origin of clothing is right there in Genesis,” so “if you abandon Genesis’ literal history of marriage and say marriage can be two men or two women or whatever you want, well why not abandon clothing?”

Because… protection and warmth?

According to one study, clothing’s been around for roughly 170,000 years, long before the mythological Adam and Eve ever existed.

But that’s Creationist logic for you. They have to contort reality so it fits within the span of a few thousand years, no matter how silly their explanations become.

October 28, 2015
A Texas Middle School Teacher Did Not Force the Class to Admit God is a Myth
Next Post