A Texas Middle School Teacher Did Not Force the Class to Admit God is a Myth October 28, 2015 Hemant Mehta

***Update***: The District released a statement confirming the version of the story I wrote about below. They point out that the question was unnecessary to make the point the teacher wanted to make, which is fair. They also added that the teacher is a Christian:

At the conclusion of the investigation today, the principal determined that the classroom activity included an item that was unnecessary for achieving the instructional standard. The activity, which was intended to encourage critical thinking skills and dialogue by engaging students in an exercise wherein they identified statements as fact, opinion, or common assertion was not intended to question or challenge any student’s religious beliefs as reported by some media outlets.

The teacher is distraught by this incident, as some commentary has gone as far as to vilify her without knowing her, her Christian faith, or the context of the classroom activity. Still, this does not excuse the fact that this ungraded activity was ill-conceived and because of that, its intent had been misconstrued. As a result, the activity will no longer be used by the school, and the teacher has been advised and appropriate personnel action will be taken.

I hope the “appropriate personnel action” is just code for “the teacher feels bad but we didn’t really punish her,” since she doesn’t deserve it.

“The United States is the greatest country in the world.”

Is that true, false, or just something that a lot of people believe even though they can’t prove it?

Or, to put it in the language of a middle school reading class, is it fact, opinion, or a “commonplace assertion”?

The answer is obvious: It’s a commonplace assertion. People can give you their reasons for why the U.S. is or isn’t the best, but it’s not something either side can prove.

What if I gave you the statement “God exists”? Fact, opinion, or a commonplace assertion?

Once again, it’s a commonplace assertion. You can’t prove it either way, but a lot of people sure as hell believe it. (For what it’s worth, saying God doesn’t exist would be in the same category.)

There’s a controversy currently brewing in Katy, Texas, because that question about God’s existence is being used as evidence for Christian persecution.

That accusation is being made by seventh-grader Jordan Wooley, who said the statement about God was a fact. Her teacher correctly told her that was the wrong answer. Now, Wooley claims she is being forced to choose between her grades and her faith.

If that sounds like the plot of the next God’s Not Dead movie, that’s because it’s just as ridiculous. But that’s the narrative conservative websites are pushing.

Wooley told the Katy Independent School District board about her dilemma on Monday night: 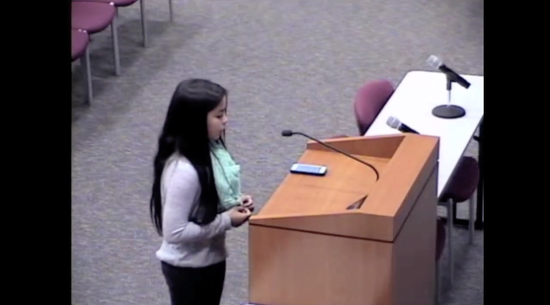 “Today I was given an assignment in school that questioned my faith and told me that God was not real. Our teacher had started off saying that the assignment had been giving problems all day. We were asked to take a poll to say whether God is fact, opinion or a myth and she told anyone who said fact or opinion was wrong and God was only a myth,” Wooley told board members.

In her speech, Wooley talked about how she knew God existed — bringing up “evidence” like the Bible. But again, it’s objectively wrong to say “God exists” is a fact. “God exists” isn’t a fact, just like “God doesn’t exist” isn’t a fact. There’s a reason faith relies on, well, faith.

Yet, conservatives are morphing this story from a discussion about different kinds of statements to one about a bad teacher “forcing” students to admit God isn’t real.

It’s a bullshit narrative. But try telling that to the 100,000+ people who have watched the video of Wooley speaking to the school board, many of whom support her.

The Board members said they would “look into it,” but there’s nothing to look into. The teacher was absolutely right in saying “God exists” is a commonplace assertion. The question itself was intended to provoke discussion. If students think the answer is wrong, it’s because they don’t understand the categories, not because a teacher is trying to rid them of their religious beliefs.

October 28, 2015 Creationist: If You Don't Interpret the Bible Literally, There's No Reason to Wear Clothes
Browse Our Archives
What Are Your Thoughts?leave a comment