Pat Robertson: Gay Marriage Only Applies to the Couples Who Argued in Front of Supreme Court October 27, 2015 Hemant Mehta

Pat Robertson: Gay Marriage Only Applies to the Couples Who Argued in Front of Supreme Court

At least, that seems to be his reasoning for why the Obergefell decision (that legalized marriage equality nationwide) doesn’t really apply to everyone. Rather, he said, it only counts for the people who filed the lawsuit. 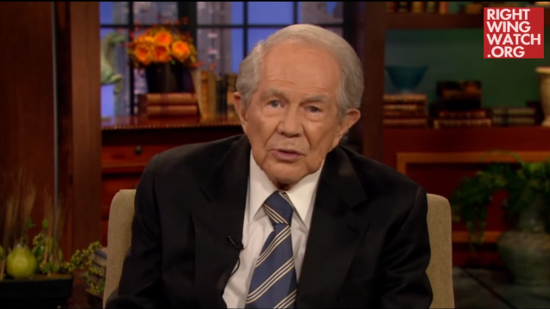 In the legal system, party A sues party B over marriage, “I want to get married to them,” and the court says, “Okay, you can get married,”… That doesn’t mean that I’ve got to get married to homosexuals, it doesn’t mean that you have to nor does it mean that it’s the law of the land. Congress didn’t pass any law. Your state legislature didn’t pass a law. So you’re not under anything, it’s a decision of the court having to do with a couple of people. Now they would like to make it bigger than that but, in terms of the Constitution, it isn’t.

By that logic, my interracial marriage is still illegal in some states since Loving v. Virginia only applied to two people. Even Clarence Thomas should be able to say Robertson is wrong on this one.

His faulty logic aside, Robertson doesn’t get the very basics of how the Supreme Court works. State legislators did pass laws limiting marriage to one man and one woman. The Supreme Court’s role is to decide if such laws are Constitutional. In this case, the answer was no, and that’s why anti-gay marriage laws were struck down. That’s exactly how it’s supposed to work.

Robertson can say he didn’t like the ruling, but he has no business saying it doesn’t apply to gay and lesbian couples throughout the country. It absolutely does.

October 27, 2015
This Map Shows You Which Law Enforcement Agencies Have "In God We Trust" Stickers on Vehicles
Next Post