Does “Thou Shalt Not Lie” ring a bell? The Green Family, founders of Hobby Lobby, have been under federal investigation since a large shipment headed to their Oklahoma City address via Israel was intercepted by U.S. Customs officials in Memphis four years ago. The FedEx shipping label identified the contents as “hand-crafted clay tiles” valued around $300.

What was really inside? 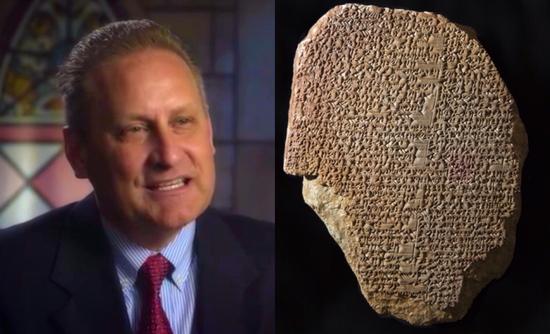 Well, they were vaguely accurate. According to the Daily Beast, the shipment contained 200-300 ancient clay cuneiform script tablets from the Assyrian and Babylonian empires, which makes them thousands of years old. The modern day country of origin of these likely smuggled antiquities is Iraq. With certainty the shipment was listed far, far below value.

A senior law enforcement source with extensive knowledge of antiquities smuggling confirmed that these ancient artifacts had been purchased and were being imported by the deeply-religious owners of the crafting giant, the Green family of Oklahoma City. For the last four years, law enforcement sources tell The Daily Beast, the Greens have been under federal investigation for the illicit importation of cultural heritage from Iraq.

These tablets, like the other 40,000 or so ancient artifacts owned by the Green family, were destined for the Museum of the Bible, the giant new museum funded by the Greens, slated to open in Washington, D.C., in 2017. Both the seizure of the cuneiform tablets and the subsequent federal investigation were confirmed to us by Cary Summers, the president of the Museum of the Bible.

So, illegally acquiring the historical property of another country through lying and complete disregard for U.S. laws, Iraq’s laws, or the cultural heritage of their people — that’s biblically permissible to the Greens. However, if a woman wants to take a hormone that’ll prevent a fertilized egg from implanting in her uterine wall — why, she won’t have any association to this morally superior craft store! In retrospect, it’s interesting that the Hobby Lobby Supreme Court case to deny female employees health benefits to birth control was taking place at the same time as this smuggling investigation. The cognitive dissonance is a marvel with this family.

Summers down-played the severity of the investigation as if the customs paperwork had some errors.

“There was a shipment and it had improper paperwork — incomplete paperwork that was attached to it.”

But an anonymous source close to the investigation says law officials have collected hundreds of hours of interviews over the past four years. That’s a lot of man hours and taxpayer dollars to sort out a misplaced signature or such.

With an estimated 40,000 ancient artifacts set to be on display at the Museum of the Bible, is it likely that this is the only case that’s not ethically free and clear? It seems doubtful. Even by Hobby Lobby CEO Steve Green‘s own admission, it’s unclear. When asked if he may have some illegally-acquired antiquities in his family’s collection, Green responded:

“Is it possible that we have some illicit [artifacts]? That’s possible.”

We’ll have to wait for the investigation to conclude to know for sure, but based on how we treat the wealthy and powerful in our country, if found guilty, something tells me they’d be told to return the artifacts and charged a fine that would be equivocal to pocket change.

It seems we’re just seeing the all-too-common seedy underbelly of the enterprising American Christian. With an estimated worth of $4.5 billion dollars, the Green family can pay others do the dirty work — collecting artifacts by whatever means necessary — so they may stage a retelling of biblical history that makes 21st century privileged, bigoted, first-world citizens feel at ease. If any lies were knowingly told by the Greens, they’ll be coddled in the reassurance of ticket sales that it was for the greater good of spreading the word God.