What would Jesus do if an atheist group adopted a stretch of highway on his turf?

I bet I know what he wouldn’t do: 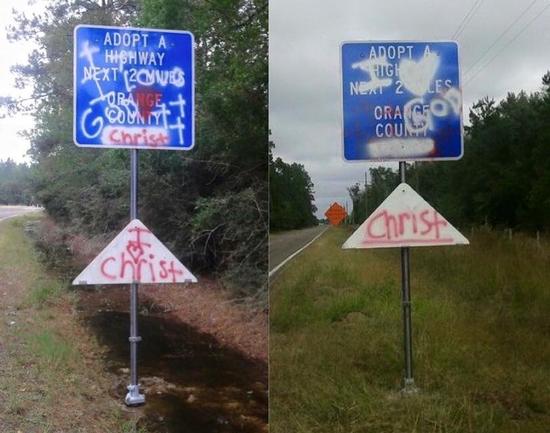 The Orange County Atheists of Texas received approval last month to adopt a 2 mile stretch of Highway 1135 in Vidor, Texas. Two weeks ago, the signs were erected. These photos were taken this morning.

That’s right: Two weeks was all it took before people were so disturbed by the thought of atheists picking up drive-by litter (possibly discarded aerosol cans, etc.), that they took measures into their own hands — and vandalized county property in what can be best-described as juvenile love notes to Jesus.

I asked member Joshua Hammers if his group had financial responsibility over the signs. (Orange County taxpayers, take notice.)

It did not cost us any money. And we were told any damage would be at our expense to repair or replace, however we did just get an email from the county saying they are taking signs down tomorrow and are going to replace them for us at no charge.

Dear future vandals, do you know what would be a productive alternative to misdemeanors like this? If your church adopted the next 2 miles of highway and you faced off against the atheists over who could keep their stretch cleaner. If you’re honest with yourself, you know this angsty approach isn’t winning anyone over. Especially not God.

***Update***: The atheist group has started a fundraiser to purchase cameras “to hopefully catch anyone who might wanna do this to the new signs.”

October 27, 2015 A Former Jehovah's Witness Shares His Journey from Abuse to Escape
Browse Our Archives
What Are Your Thoughts?leave a comment