Bo Juel left the Jehovah’s Witnesses when he was 23, after the elder who molested him as a child was invited back to the church for the third time. For his decision, Juel was Disfellowshipped by his family, including his physically abusive stepfather. He was also forbidden from ever seeing his own daughter (and, since that time, his two grandsons).

He eventually become one of the founders of Advocates for Awareness of Watchtower Abuses, a group that sheds light on human rights violations within the Jehovah’s Witnesses.

He just released a memoir called The Least of God’s Priorities (Exodus Publishing, 2015), and it’s a moving look at his journey both in and out of the Witnesses. 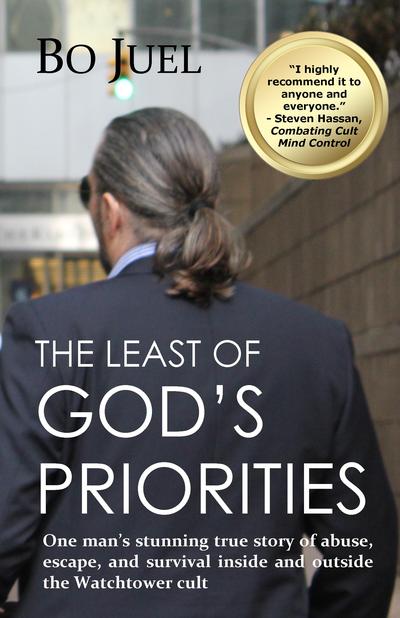 In the excerpt below, Juel recalls seeing the man who molested him preaching to a crowd. Juel wonders how he ever believed in a God who would allow that to happen:

I could not tell anyone about what was happening. I could not say anything to anyone. I watched this evil man stand at the front of a Kingdom Hall and preach about morality, about men who have sex with men and other sins that people committed, acting as if he was full of righteousness. He spoke to the congregation about all this at the same time as I was sitting there in the audience, knowing what kind of sick monster he was.

I knew, and I felt I was the only one. I could speak to no one about it, because I knew what he would do to me if I told. I had spent many hours in that tiny little room, knowing that if he wanted to, he could shove me in there and throw away the key, and no one would ever find me. Rats would eat me. I knew that was what would happen if I told anyone a word about what was going on.

The abuse continued for many years. I can hardly remember anything from that period of my life. I have all these terrible memories and nothing else. Nothing good. Nothing nice, just pain and suffering and a spirit that almost died. I fought to stay alive and sane in those years, something no child that age should have to do. I was always afraid.

It makes me sick thinking back on all the nights I was praying to this god, asking that he would let me live. I promised in my prayers that I would never think one single bad thought again. However, I never asked him to save me from the abuse. How could I? It was one of the elders of our congregation who was doing this to me. One of god’s elders, who was appointed by god’s holy spirit to lead the congregation. How could I ask god to make one of his elders stop what he was doing? That would be like saying that the holy spirit had made a mistake. God’s holy spirit does not make mistakes, so it had to be me that was wrong, right? That was my thought process as a young boy, so I just resigned myself to my fate and lived with the abuse all those years. I stayed quiet, until one day in 1981 when the whole dam inside of me just broke.

Eventually, Juel told his family about what the elder did to him and said he no longer wanted to go to meetings. His mother had him speak to a police officer, but nothing seemed to come of it.

Give or take a month after the policeman was in our house, I asked my mother what was going to happen to the man who did this to me. She avoided a straight answer, which of course usually means that the person is hiding something or doesn’t want to answer in the first place. She instead just told me to ask my father.

So I did. My father then looked at me and said, “You do know that if this becomes a court case, you will have to sit and tell everything in front of a lot of people, right?” I did not reply. He continued, “If this goes to court, there will be journalists there with cameras and they will take your picture and put it up on the front page of the newspaper. All of your classmates will see what happened to you, and you do not want that, do you?” I shook my head.

He went on, “I did not think so. That’s why there will be no court case, there will be no journalists, and there will be no more talk of this, ever. The man who did this to you is disfellowshipped from Jehovah’s organization. That is enough punishment. He will die if Armageddon comes tomorrow, and you know what happens to those who die at Armageddon, don’t you?”

I just nodded my head. I knew very well what happened to those who were killed in Armageddon; they got no second chance. They would die by the hand of god himself. No return for them. “So there will be no trial and he will not pay any price for what he did to me?” I asked.

“Oh, he paid when he was disfellowshipped from Jehovah’s people. By the way, I said there would be no more talk about this.” He made a suggestion with his body language for me to get the hell out of his sight, so I did.

Just horrifying stuff. You should bring it up the next time a couple of JWs knock on your door and want to have a conversation.

The Least of God’s Priorities is now available online. Be sure to check it out.