Although the skeptic community doesn’t really have leaders, or those we hold as infallible, there’s still a tendency to drop our guard around other members who are highly respected. This was the case last week when I saw Neil deGrasse Tyson speak at the CUNY Graduate School of Journalism while accepting the 2015 Knight Innovation Award. 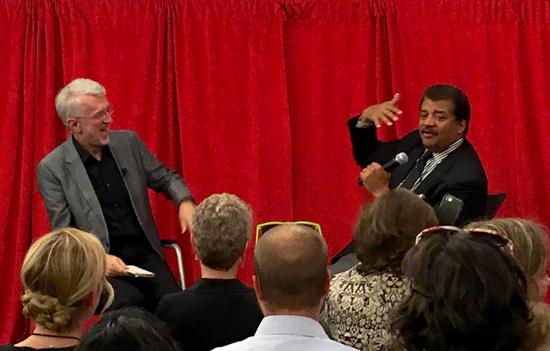 Dr. Tyson was engaged in a lively on-stage interview with CUNY Professor Jeff Jarvis about the topic of podcasting and journalism. When the conversation seemed to veer toward religion, naturally, I turned on the camera hoping to capture a glimpse into an area Tyson is reluctant to divulge much information about.

Talking about the importance of fact-checking and what he called “impression checking” in journalism, Tyson offered a personal example:

Tyson: There’s fact checking and then there’s impression checking. People, I don’t know journalists who impression check. What’s an impression check? You write a sentence that is factually accurate, but 9 out of 10 readers will think something other than what you intended by that fact.

Tyson: For example, I have a better example, you ready?… There was a profile of me in the New Yorker… The reporter had shadowed me for months, and in the last day decided to ask a question. They said, “So, um, did you grow up in a religious household?” And I said, “Well, our family was Catholic, you know, we kinda-sorta went to church. And then that ended pretty much, like, late elementary school. We became ashes and palms Catholic, just go two holidays and that’s the one. And it wasn’t really — my mom was a little more than the rest of us, but it was not an explicit factor in anything that went on in the household. At no time did anyone say ‘what would Jesus do?’ or ‘God will not look…’ That never happened, okay?!”

So, in the article, it comes out, it says, “Tyson had a devoutly religious childhood”…

So what’s your impression if you read that? You will have the wrong impression. So the fact that I went to church every weekend until I was 7, to a reporter sounds like it’s devout.

In other words, even though it’s factually accurate to say Tyson attended church growing up, the reporter got the wrong impression to think that meant he was devout.

After Tyson’s defensive rant, I decided I’d make a post about this video. I wanted to help dispel the myth about his “devoutly religious childhood” to anyone who read the aforementioned article.

Being very careful to fact-check myself, here’s what I found in the February 17, 2014 issue of the New Yorker, in an article titled “Starman” by Rebecca Mead:

Tyson attended a Catholic church as a boy, but he began questioning the Church’s tenets before entering his teens. When pressed, he calls himself an agnostic, but he resists labels, maintaining that atheism has come to imply activism. “My confidence that there is a loving God who cares at all for your health or your longevity, based on what I see in the physical universe, is so low that it is not something that I would spend any time investing in, to try to explore any further about whether or not it’s true,” he says. “I’ll let other people do that exploring. And, if they bring the evidence to me, that’s fine.” Tyson’s dogged nonpartisanship can be seen as a form of retreat. In an interview that has been watched 1.3 million times on YouTube, he says that he does not have the time, energy, or interest to enter a debate about atheism. “It’s odd that the word ‘atheist’ even exists,” he says. “I don’t play golf. Is there a word for non-golf players? Do non-golf players gather and strategize? Do non-skiers have a word, and come together, and talk about the fact that they don’t ski?”

That was very curious… Not only did the reporter not use the word “devout,” she seemed to describe him the very way Tyson hoped she would.

I sent Mead a message asking if she had edited this article, specifically noting the paragraph on religion. She assured me she had not and said Tyson must be “slightly misremembering” the article.

In reviewing his own words, Tyson says he attended Catholic church “every weekend until I was 7” and also says “but that ended pretty much, like, late elementary school.” His own story is a bit conflicting here since late elementary would imply an older child of 11-13, but it perfectly fits the article’s version, which states, “but he began questioning the Church’s tenets before entering his teens.”

As far as it can be evaluated, Rebecca Mead was spot on and represented Dr. Tyson accurately according to his own admission.

I was hesitant to write this story, as I feared I’d be accused of nit-picking everyone’s favorite astrophysicist. (Hey, I love him too.) But because the topic that spurred the tangent was about the importance of journalistic integrity, Tyson’s example was not just blatantly wrong, he inadvertently became a perfect example of his own gripe.

He gathered a mistaken impression from the article and rewrote the words in his head, replacing her innocent statement with a demonized version he says is verbatim. It called into question Rebecca Mead’s abilities as a journalist in front of a crowd full of strangers. That seems unfair to her.

It happens. We all make mistakes. It’s important to hold each other accountable, especially in the community of skeptics where our objective is truth-seeking. Dr. Tyson is undoubtably one of the most intelligent people alive today, and even he’s no exception to that rule. That should at least be reassuring to us. Also, being mistaken offers an opportunity to learn, apologize, and try to do better — which is the mature and respectable response.

And as a side note: I was amused to discover that the 10 Things You Didn’t Know About Neil deGrasse Tyson blog post that Tyson mentioned in the video… was none other than a Friendly Atheist post made by Hemant Mehta. Small world.

Ultimately, I think the verdict is in on Neil deGrasse Tyson’s childhood religiosity — it was not devout.

October 26, 2015
She Lost Her Newborn Daughter, but Please Don't Comfort Her with Religion
Next Post

October 26, 2015 A Creationist's Response to Bill Nye's Climate Change Warnings
Browse Our Archives
What Are Your Thoughts?leave a comment