Winter Garden (Florida) has been the site of a few church/state separation problems over the past year. It began when an atheist, Joseph Richardson, was kicked out of a public meeting for not standing during the invocation or Pledge of Allegiance (even though no one should ever be forced to participate in either). That led to a back and forth over whether religion should be at public meetings at all. This past March, after temporarily doing away with prayers at meetings, they voted to bring back the invocations.

And how has that gone? In the past seven months, there have been 14 meetings… and with one exception, when there was just a moment of silence, every invocation has been delivered by a Christian pastor. No diversity whatsoever and a very clear violation of the law. The Central Florida Freethought Community and Freedom From Religion Foundation sent letters to the Winter Garden Commissioners early last week, warning them about the First Amendment violations they were committing when, in what seemed to be a total coincidence, they decided to do the right thing.

Atheist Ed Lynch was invited to deliver an invocation on Thursday — and he made sure to make the most of it. He thanked Richardson for putting this whole process in motion and told the Commissioners, “Let us play.” 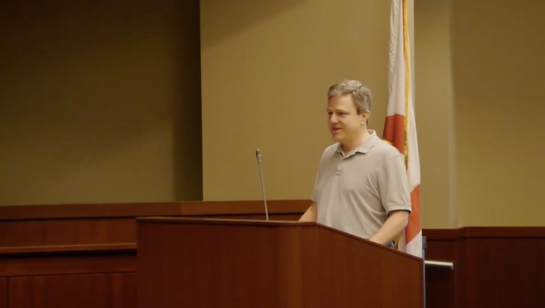 Before I begin the invocation, I would like to briefly give thanks. This will be the first non-religious invocation before a government meeting in this city — as far as we know.

For their role in getting us to this point, after countless religious invocations and a few recent moments of silence, I would like to thank Joseph Richardson — for blazing the trail; David Williamson and the Central Florida Freethought Community, along with the Freedom From Religion Foundation, for all their hard work supporting the Constitution; city staff for their work on this issue; and this Commission for inviting me to do the invocation today. Thank you all.

Thank you to you, double.

Thanks also to everyone here today for taking the time to participate in our democracy. Winter Garden is a great place to live, work, and play. So with that, let me begin the invocation:

There is work to be done but let’s not forget to play. One of the greatest human accomplishments took a great deal of work but started with a most playful idea, “Let’s fly to the moon and back.”

From the first time we touched the mobile hanging over our crib, we learned that effort is rewarded. As toddlers we were constantly learning mostly through play. Throughout childhood we learned many lessons through play:

The importance of a level playing field.

The importance of teamwork.

Play by the rules.

Learn from your mistakes.

Make sure everyone is included.

Be humble in victory and gracious in defeat.

In other words, treat others how you would want to be treated.

All learned through play.

Think about it; we are literally stardust. Only as a result of incredible luck: the unlikely conditions for the beginning and continuation of life, followed by billions of years of evolution. Here we are. Stardust. Capable of playing — Angry Birds, Minecraft, Rocket League, Fallout 4, Orlando City, Solar Bears, here in Winter Garden.

What’s with that interruption? Don’t thank us. We didn’t invite you. Only one Commissioner did.

In any case, we have yet to see if the Commission will make the invocations more diverse. Having a token non-Christian speak isn’t enough.

Joseph Richardson explained to me over the weekend that this may really have been a coincidence after all. The letters from the atheist groups were addressed to the Mayor, but apparently, he hadn’t shared them with the other Commissioners before the meeting. So when Commissioner Colin Sharman invited Lynch to give the invocation, it really happened without a legal threat.

So good for him. The question now is whether other atheists, Richardson included, will be allowed to give invocations in the future. I know they’re requesting it.

Just FYI: The Central Florida Freethought Community is organizing several more of these invocations all over the state. You can see their running list — along with a compilation of transcripts of secular invocations around the country — right here.