No, a High School Football Player Wasn’t Penalized for Praising Jesus After a Touchdown

We’ve seen this happen before: A football player makes a touchdown, gives a shout-out to God, gets penalized for “unsportsmanlike conduct,” and then whines about how it’s Christian Persecution.

It’s never really about persecution. Some refs don’t want to see a celebration of any kind following a touchdown, so the moment your hand goes up in the air or you make some sort of excited gesture, they throw the yellow flag.

That’s exactly what happened on Saturday during a game between two high school teams in New York. Mexico Central Academy quarterback Dante Turo ran nearly the length of the field to score a touchdown. As he got into the end zone, he pointed to the sky. The ref immediately called him out on it. 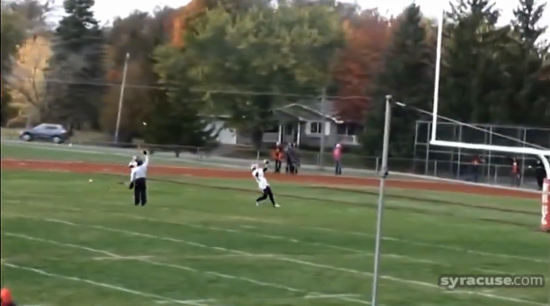 The result: The TD counted, but Mexico was penalized 15 yards for the conversion attempt. [Head Coach Tee] Murabito opted to go for two points, because the kick of one point would have been from about 33 yards away.

Mexico didn’t make the two-point conversion and went into the locker room at halftime down, 13-12.

“At that point, right before the half, we would have kicked to tie the game,” Murabito said. “So we had to go for two. It kind of changed the course of the game.”

Because they lost such a close game, you can point to any single play and claim it made the difference… and if you want to perpetuate the myth of Christian Persecution, then that’s the play you’re going to use.

Granted, it’s just a football game — but what happened in New York over the weekend is an example of something that’s happening across the country.

Christians are being told to keep their beliefs to themselves.

Dante will be back on the football field Friday night. And should he be fortunate enough to score a touchdown, the young 17-year-old told me he will honor God.

“Without a doubt I will raise my finger,” he told me.

This has nothing to do with Turo’s beliefs. It’s not like the ref was waiting to see which God he was pointing at before throwing the penalty flag. The ref saw a celebration and blew the whistle. You can say assessing a penalty on any celebration is a stupid rule to begin with, and other referees told a local reporter they didn’t find Turo’s gesture excessive enough to warrant a whistle, but you have to be Starnes-level delusional to say he was being picked on because of his faith.

If anything, God thought so little of the gesture, that He caused the team to lose the game.