***Update***: The Freedom From Religion Foundation has sent a letter to the City Commission warning them to stop these actions.

On Wednesday night, atheist Joseph Richardson delivered the invocation at a meeting of the Apopka City Commission in Florida. It was an excellent speech, referencing Carl Sagan and reminding commissioners to work together and be inclusive of all people. 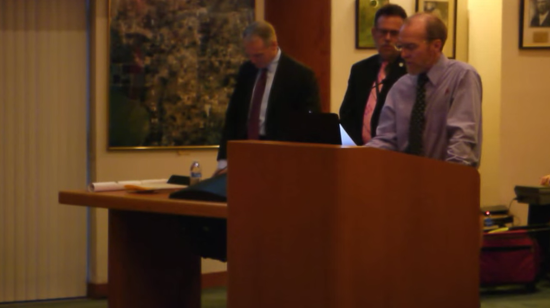 But that wasn’t good enough for Mayor Joe Kilsheimer. At the end of the meeting, after Richardson had already gone home, Kilsheimer invited a Christian pastor to give the real invocation. You know, to make up for the fake one given by the atheist.

[Kilsheimer] turned to local pastor Doug Bankson, who was in the audience.

“Maybe, Pastor Doug, since we were kind of uncovered at the start of the meeting, can you cover us with a benediction as we leave tonight?”

Bankson of Victory Church World Outreach Center in Apopka obliged with a prayer that ended “in the name that is above all names, Jesus.”

The audience broke into applause after Bankson’s “amen.”

“Uncovered”? What the hell does that mean? That Richardson’s invocation wasn’t good enough? That it didn’t “cover” the bases by invoking the Christian God?

The mayor tried to dial back the criticism later:

“I personally don’t think that one expression negated the other. They both stood on their own, and they’re both expressions of concern for the community and for how we conduct our business. They’re both equally as valid,” he said.

That’s a lie. And here’s how we know that: Whenever a Christian gives the invocation, an atheist isn’t invited to give a “re-do” speech at the end.

It’s not the first time something like this has happened.

Earlier this month in Keller (Texas), an atheist was told he could give an invocation… but only if a Christian could follow him immediately afterwards. Eventually, after being told that was illegal, the mayor decided to cancel both invocations, delivering his own prayer to Jesus instead. (He didn’t realize that was illegal, too.)

These elected officials could at least pretend to treat people fairly. But their pro-Christian agenda is completely transparent to anyone paying attention.

October 23, 2015
Virginia Pastor Lies About Being a Navy SEAL, but Gets Caught Thanks to His Own Stupidity
Next Post