Earlier this month, just a day after the Ten Commandments monument outside the Oklahoma State Capitol building was taken down because it was deemed illegal government promotion of religion, the Johnston County Commissioners (in the same state) put up a similar monument outside their local courthouse. (Because who gives a damn about the law, that’s why.) 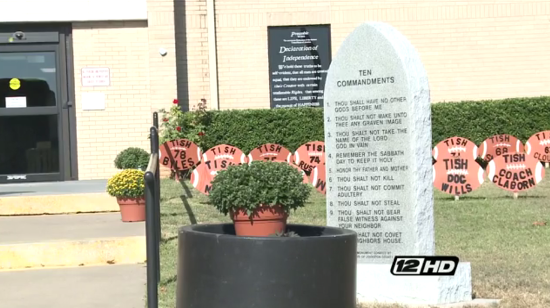 Just to remind you, the law makes very clear that a monument like this one is unequivocally illegal. The Supreme Court said that years ago. So unless the Commissioners were willing to put up monuments from Satanic or atheist groups, this had to come down.

It hasn’t happened yet, though, and that’s why the ACLU just announced that it plans to file a lawsuit to remove it:

ALCU Legal Director Brady Henderson said they are not filing the lawsuit because the monument offends people; rather, it is part of a much bigger issue.

Ironically, the ACLU will be filing the lawsuit at the Johnston County courthouse.

This one isn’t even in doubt. The Commissioners have no path to victory here.

Which is another way of saying we should all expect Mat Staver and Liberty Counsel to swoop in and defend the Commissioners even though it’s a losing battle. There’s free publicity up for grabs!

(Image via KXII. Thanks to Brian for the link. Large portions of this article were published earlier)

October 23, 2015
No, a High School Football Player Wasn't Penalized for Praising Jesus After a Touchdown
Next Post

October 23, 2015 Donald Trump: When I'm in Office, Every Store Will Be Saying "Merry Christmas"
Browse Our Archives
What Are Your Thoughts?leave a comment