There’s a famous quotation by physicist Steven Weinberg that says: “Religion is an insult to human dignity. With or without it you would have good people doing good things and evil people doing evil things. But for good people to do evil things, that takes religion.”

We know what he’s saying: There are plenty of people who don’t fit the stereotypical description of “evil” but who end up saying/doing horrible things because their faith leads them to it.

For example, I’m sure Mike Huckabee is a great father and a reliable friend. And yet, when he talks about gay people, I’m always disgusted by his remarks. So is he a horrible person? On that issue, yes. In general? I don’t think so. I’ve often felt that way about people I’ve met who don’t share my views: “They’re really nice; they’re just wrong.”

Or let’s look to the Bible: Abraham is consider a good, devout man… who is willing to kill his own son because he thinks it’s what God wants him to do.

Was Abraham evil? Or did his devotion to God push him to nearly commit an undoubtedly evil act?

That’s what Weinberg was talking about. Faith can lead otherwise decent people to do really horrible things.

In a recent interview with Irish TV host Gay Byrne, Richard Dawkins brought up another example of this phenomenon. He referenced the 9/11 hijackers who killed thousands of people (and wanted to kill more) all in the name of their God. Were they always evil, or were they driven to evil by their religious beliefs? 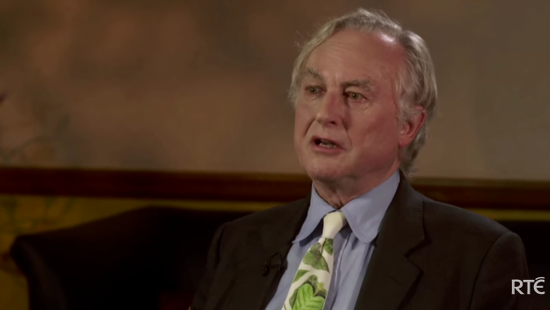 That’s a complicated question. If you met the hijackers in person before the attacks, it’s very possible you wouldn’t have pegged them as murderers. We hear that about school shooters and serial killers all the time, don’t we? I knew that guy and I didn’t think he’d ever be capable of doing something like this!

None of that justifies what they did and none of it suggests their actions weren’t evil. It only raises the question of whether these people were always evil to begin with.

That’s what Dawkins was getting at:

I think the 9/11 hijackers all sincerely believed that they were doing the right and proper moral, religious thing. They were not in themselves evil. They were following their faith — and faith is pernicious because it can do that to people. It can do that to otherwise decent people.

It’s not just religion, by the way. Dogmatic thinking of any sort can drive people to extremes.

So what does Bristol Palin, who seems to be in a perpetual battle with Todd Starnes over who can most quickly gin up fake scandals to further their agenda, have to say about Dawkins’ remarks?

Well, the headline on her piece is: “Richard Dawkins Says 9/11 Hijackers Weren’t Evil”… so take a wild guess:

Regardless of your religious beliefs or lack thereof, it’s absolutely ludicrous to say that men who chose to train for years with the sole aim to kill as many people as possible are somehow not evil. I would say their actions are the very definition of evil.

Great! Dawkins would agree with you! Their actions were evil.

But Dawkins is raising a different concern, one that requires serious debate, which may be why Palin isn’t capable of dealing with it.

This is the problem with radical atheists like Richard Dawkins. Their agenda is to attack people of all faiths. And Dawkins has to fit even something as obviously evil as the terrorist attacks on 9/11 into his own radical agenda.

The only way that makes sense is if you live in a bubble and don’t understand what “context” means. Which seems to describe Palin pretty well.

In that same interview, by the way, Dawkins pointed out that people can be driven to do very good things because of their faith, and that some atheists have done really horrible things as well (albeit not in the “name” of atheism).

Palin ignores all that. She’s too busy being outraged.

I would tell her all of this on her site, but she doesn’t allow comments. I guess outrage doesn’t work if people are allowed to challenge you on your bullshit.

October 23, 2015 No, a High School Football Player Wasn't Penalized for Praising Jesus After a Touchdown
Browse Our Archives
What Are Your Thoughts?leave a comment