When Asked About His Religious Beliefs, Bernie Sanders Says “I Am Who I Am” October 22, 2015 Hemant Mehta

When Asked About His Religious Beliefs, Bernie Sanders Says “I Am Who I Am”

Sen. Bernie Sanders is Jewish. He’s said that for years. His father’s family even died in the Holocaust. That said, he’s not especially religious himself. Certainly, he’s the least openly religious presidential candidate we’ve seen in a long time. He doesn’t wear his faith on his sleeve the way most of the GOP candidates do.

Based on that information, Jimmy Kimmel asked Sanders about his faith last night, and what Sanders didn’t say spoke volumes: 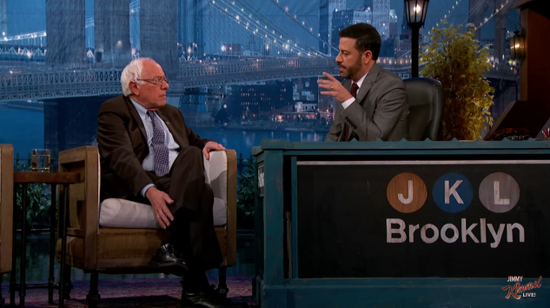 Kimmel: … You say you’re culturally Jewish, you don’t feel religious. Do you believe in God, and do you think that’s important to the people of the United States?

Sanders: Well, you know, I am who I am. And what I believe in and what my spirituality is about is that we’re all in this together. That I think it is not a good thing to believe that, as human beings, we can turn our backs on the suffering of other people…

It was a fantastic answer that ought to connect with members of just about every major faith in the nation. And yet, there will inevitably be people who try to use that response against him because he didn’t say a specific label.

Sanders isn’t an atheist. Not publicly, anyway. But even if he was, you really couldn’t have given a better response than that.

Sure, he could have said religion shouldn’t matter when it comes to politics, but it does. That’s just the reality of it. People care. So a response that doesn’t belittle anyone’s beliefs, but instead points to what we all have in common, makes for a powerful answer.

There’s a common criticism that Sanders isn’t electable. But the more he’s on the campaign trail, and the more he has a chance to present himself to the public like this, the better he seems to be getting.

October 22, 2015
In Colombia, Atheists Protesters Attacked by Catholics in Public Park
Next Post