31% of Americans Reject Evolution, According to New Report

Most of the headlines regarding a new report from the Pew Research Center involve the conflict (or lack thereof) between science and religion.

If you’re not a frequent churchgoer (*waves hello*), you probably think there’s a conflict. But if you go to church often, you’re more likely to find ways to reconcile science with your religious beliefs. 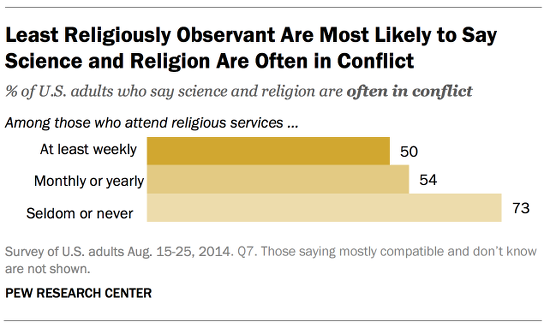 That said, while people felt religion and science were often in conflict, that didn’t mean it was necessarily a conflict for them: 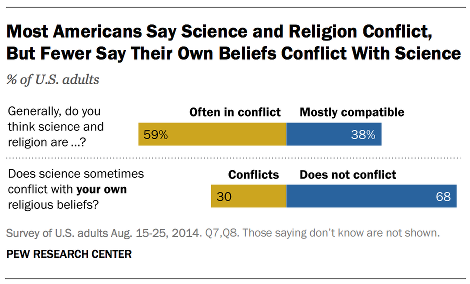 That’s not very surprising to me. Whether it’s the Big Bang or the Virgin Birth (which, I guess, is the opposite of a big bang), most people find a way to reconcile and rationalize the obvious conflicts, even when it makes no sense to do so.

But the part that really stood out to me involved Americans’ acceptance of evolution.

It turns out 31% of Americans are Creationists. They believe we were created in our present form some time ago. (Many of the other 69% believe in God-guided evolution, but that’s a topic for another day.) 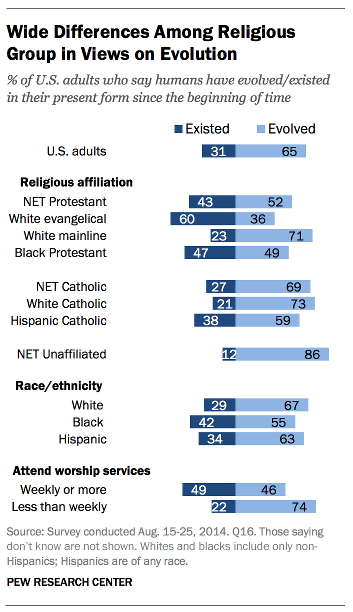 That’s depressing, isn’t it? 60% of white evangelicals reject evolution in any form. That same belief is accepted by only 2% of scientists in the American Association for the Advancement of Science.

That says so much, doesn’t it? When science and religion are in conflict — and many people believe it is — there are a hell of a lot of people who prefer fiction over fact. And there seems to be nothing we can do to change their minds.

October 22, 2015
When Asked About His Religious Beliefs, Bernie Sanders Says "I Am Who I Am"
Next Post