University of Utah Football Coaches Are Teaching a Class in Mormonism to Players October 21, 2015 Hemant Mehta

Normally, when we hear about football coaches pushing religion on players, it’s in an informal, coercive way: they pray before/after games or mention God in pep talks.

At the University of Utah, their football coaches are literally teaching a class in Mormonism to the players. 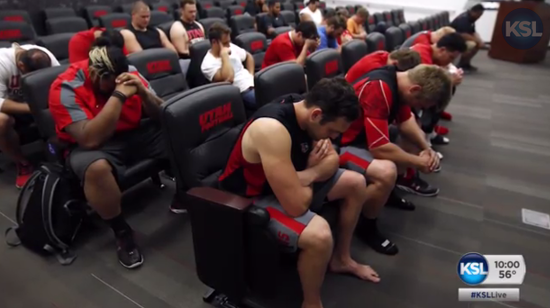 Just to make clear, there are two problems here: You have university employees teaching what amounts to a Sunday School class (as opposed to, say, a secular class on the history of Mormonism)… and you have football coaches teaching a class that football players are expected to take (even if it’s “voluntary” in name).

The players are welcome to get a religious education on their own time — I’m sure someone in Utah can help them learn Mormon theology — but the locker room isn’t the place for it.

“Major college football is a highly coercive environment, so if religious courses are being taught and being injected into a major college football program, players are going to likely feel pressured to take part in these religious classes,” [Americans United for Separation of Church and State associate legal director Alex ] Luchenitser said. “It’s not an academic class at all. They’re teaching the gospel in this class. That’s clearly across the Constitutional line. All these players, if they want to go to church, they can go to church.”

Some players were quoted in the KSL.com article as really enjoying the religious classes, but that’s completely irrelevant. The students who feel pressured to take the class are the ones least likely to speak up. This isn’t a popularity contest. This is about following the law.

University officials say they will have their legal counsel review AU’s letter and respond soon.

(Screenshot via KSL.com — Thanks to Randy for the link)

October 21, 2015
Mormon Leader Says Kim Davis Was Wrong to Use Her Faith as an Excuse Not to Do Her Job
Next Post

October 21, 2015 After Much Debate, Evangelical Group Takes a New Position on the Death Penalty: ¯\_(ツ)_/¯
Browse Our Archives
What Are Your Thoughts?leave a comment