Someone at a local Toledo news station must have lost a bet since he had to interview the candidates running for mayor. All the candidates. Even the fringe ones.

And that meant interviewing Opal Covey, a self-described “prophetess” who… oh, does it really matter after I’ve said that?

Covey complained about how she totally won the election in 2013 — this is her fifth time running for mayor — but had it stolen from her. The best part about the interview, however, came at the end when the reporter asked her if she had anything else to say to voters.

She paused for a bit, then looked straight into the camera, spoke in tongues, and threatened voters with God’s wrath: 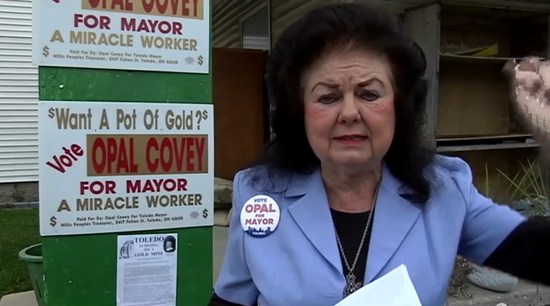 Thank you, Jesus. That was a confirmation. If people don’t give me what I earned in 2013 back, and I’m not on that seat in November, then you’ll see God come and visit in the city in the greatest destruction you’ve ever seen.

She seems lovely and capable.

If someone can translate the Christian gibberish, I would appreciate it.

October 21, 2015
Donald Trump: I Would "Absolutely" Close Down Mosques to Fight ISIS
Next Post