Mormon Leader Says Kim Davis Was Wrong to Use Her Faith as an Excuse Not to Do Her Job October 21, 2015 Hemant Mehta

Breaking news: A leader of the Mormon Church said something about Kim Davis and it was actually sensible!

Elder Dallin H. Oaks, a member of the Quorum of the Twelve Apostles, gave a speech in California on Tuesday that referenced the church/state divide and alluded to Davis: 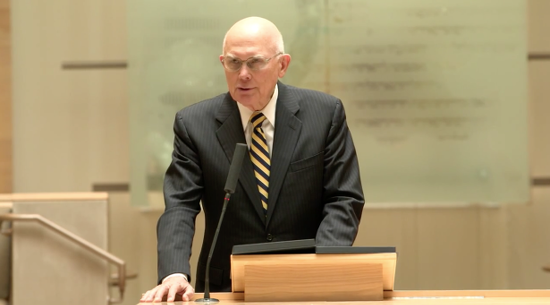 Office holders remain free to draw upon their personal beliefs and motivations and advocate their positions in the public square. But when acting as public officials they are not free to apply personal convictions — religious or other — in place of the defined responsibilities of their public offices. All government officers should exercise their civil authority according to the principles and within the limits of civil government. A county clerk’s recent invoking of religious reasons to justify refusal by her office and staff to issue marriage licenses to same-gender couples violates this principle.

What does Kim Davis’ lawyer have to say to that?

Davis’ attorney Mat Staver, fired back at the Mormon Church. He said in an emailed statement that “any attempt to punish a person for the exercise of conscience is sinful.”

Or, put another way, Davis has the right to break the law if her religion says it’s okay!

Oaks’ speech wasn’t all great, though. At one point, he argued against the separation of church and state:

I reject the idea of a wall between church and state. The more appropriate metaphor to express that relation — reinforced by various decisions of the United States Supreme Court — is a curtain that defines boundaries but is not a barrier to the passage of light and love and mutual support from one side to another.

That’s about as deepity as one can get.

You know what happens when your impenetrable wall becomes a permeable curtain? People like Kim Davis walk right through it.

Still, it’s not often we hear a religious leader call for compromise instead of saying, as Staver does, that certain groups deserve special rights. So we ought to applaud him for that… and remember that we’re still talking about a Church that fought to ban marriage equality in California in 2008. They have a long way to go.

Not a bad speech, though.

October 21, 2015
A Compilation of Peter Boghossian's Best Arguments and Comebacks
Next Post