Donald Trump: I Would “Absolutely” Close Down Mosques to Fight ISIS

Speaking with the Fox Business Network’s Stuart Varney yesterday, Donald Trump said he would shut down mosques in the U.S. in order to combat ISIS. 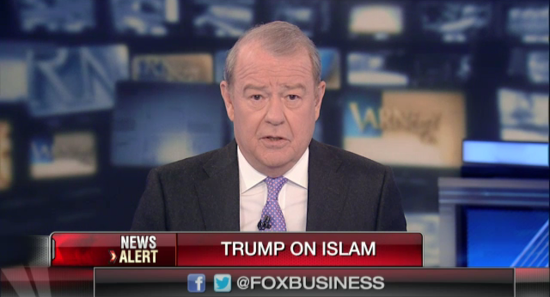 Varney: … They’ve got a whole new series of proposals to deal with this [in England], including withdrawal of passports from some of these people…

Varney: … And closing some mosques. Would you do the same thing in America?

Trump: I would do that. Absolutely. I think it’s great…

Trump said a few seconds later he wasn’t sure if he could do that, but said “it depends.” (He loves the Constitution so much, he hasn’t read the First Amendment.)

Maybe if he gave it a second of thought, he’d realize shutting down mosques would push even more people into the hands of the radicals. Curtailing freedom isn’t how you fight for freedom.

As far as I can tell, no one on the Christian Right has challenged Trump on this issue yet, showing once again how little they care about people who don’t believe what they do. If President Obama ever suggested closing down Christian churches in order to prevent anti-LGBT bigotry, you can bet they would never shut up about it.