The Greater Tabernacle Church in Lawrenceburg, Tennessee just got kicked out of the Lawrence County Association of Baptists. It’s a serious matter since they could now lose their building. The deed says the space is only available to the congregation as long as they’re members of the Baptist association in good standing.

What horrible thing did they do to get kicked out of the association?

They voted for a woman to be their new pastor. 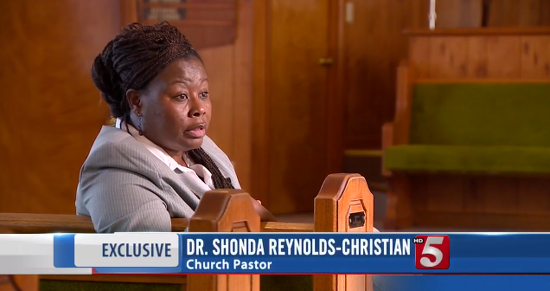 “I was called,” Reynolds-Christian said, “I just believe that God opened up the door and that’s how it happened.”

Yet, with a letter in the door this week, the church was kicked out of the county Baptist’s Association. The vote Monday was 73 to 4: a no tolerance policy for a female pastor.

The association is giving the church another chance, though. All they have to do is elect a new pastor to replace Reynolds-Christian.

To their credit, the congregation members aren’t budging:

… in the letter from the Association, Church members are told they can still get rid of Pastor Reynolds-Christian and possibly re-join the group. Kemper says the situation is not personal.

“You got to feel the love of a person,” said Deacon and founding church member Murry Green, “for somebody else to come in and do the same thing as she did, that’s not gonna happen.”

“We encouraged them to reconsider,” [Lawrence Co Association of Baptists Minister Mark] Kemper said, “they decided they weren’t going to do that so we did what we had to do. They put us in this position.”

Kemper said there was no timeline for the decision of whether or not to seize the church property.

You can’t get more Southern Baptist than that: They put us in this situation by having a female pastor. We may have to kick them out of their church now. This hurts us more than it hurts them.

If the building is taken away from them, there’s no telling where the church members would go. I’m sure they’d find space, but it would probably take a lot of money. (On the brighter side, they’d no longer be associated with the Southern Baptist Convention, and that’s cause for celebration.)

You don’t have to defend Baptist beliefs to feel bad for a church that’s being punished for choosing the most capable leader instead of a random guy to please the higher-ups.

(Screenshot via NewsChannel 5. Thanks to Chris for the link)

October 19, 2015
These Quotations Are Definitely Real Because They Appear in an Image
Next Post