Earlier this month, the Sycamore Creek Church in Ohio ordered a pizza (which you do on a Sunday morning) and gave the delivery woman a tip worth just over $1,000 as a gesture of kindness. Which sounded nice, bought the church a lot of publicity, and gave the driver a bit of a reprieve, too: 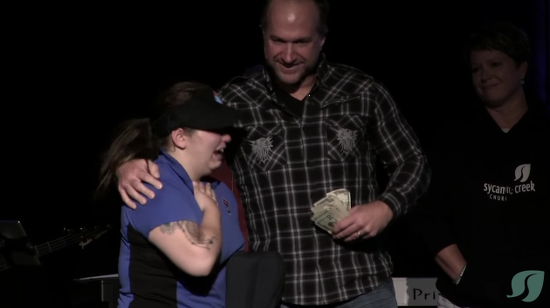 Natasha Boyer, a single mom, woke up on Oct. 4 to an eviction notice taped to her door. She’d missed a week of work while hospitalized with pneumonia, and with that a week of pay. One lost paycheck meant she couldn’t afford her month’s rent.

“I was trying to come up with a way to get almost $1,000 to try and figure out how to keep my home so I didn’t lose my job,” Boyer told The Washington Post on Wednesday. “My prayers were literally answered in a matter of hours.”

That’s great for her… but now what? They gave her a bandaid when she needs surgery. Does the church have any plans to follow up and take care of her, or is she back on her own working a law wage job? And if this was just a one-time act, what exactly was the message they wanted to send? Trust in God and maybe you’ll be rewarded once? Make sure you’re delivering pizza to a community where there’s a wealthy church nearby?

I’m not dismissing the church’s act — it’s not like any other group was handing over $1,000 out of nowhere — but I am questioning their motivation.

Here’s my hope, though.

That this church, if it’s not already, extends its teaching of generosity to a teaching of justice so that pizza delivery drivers aren’t reliant on fickle generosity of their customers to make ends meet but rather get to work for a living wage.

My hope is that the next time the church doesn’t use someone’s poverty as an object lesson for their own emotional payout.

The best interaction may have been the battle of Bible verses taking place underneath the church’s YouTube video:

In other words, the church pointed to “let your light shine before others, that they may see your good deeds and glorify your Father in heaven,” and a commenter responded with “Be careful not to practice your righteousness in front of others to be seen by them. If you do, you will have no reward from your Father in heaven.”

Who knew the Bible could be so confusing…

I’m not being completely cynical here. It was a nice thing for the church to do. But I’m also wondering how many of those church members are voting for candidates who want to abolish or merely maintain the minimum wage, who oppose comprehensive and affordable health care, and who fight against food stamps and Medicaid and any form of welfare. Wouldn’t changing voting habits do far more for the poor than a one-off video?

October 19, 2015
Maine's Governor Has Appointed a Creationist to Head Up the State’s Department of Education
Next Post