Military Official Claims “God Bless” Sign on Base is Secular

“May the Force be with the military, their families, and the civilians who work with them.”

The above is one of nine new signs the Military Religious Freedom Foundation is requesting on Marine Corps Base Hawaii. They would join the only current religious sign on the base, which reads “God bless the military, their families, and the civilians who work with them.” 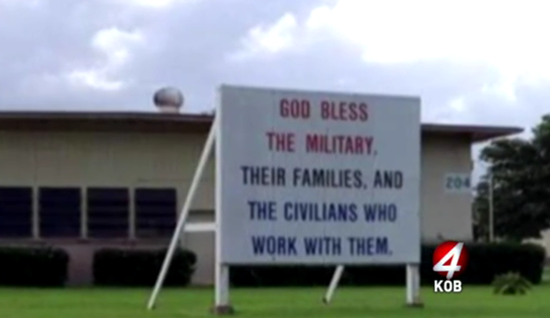 The request to add a sign invoking the Force comes after Colonel Sean C. Killeen, USMC, responded to the MRFF’s earlier objections about the “God bless” sign with the rather unconvincing claim that “God bless” is really a secular, non-religious expression:

“God Bless” is commonly used in our culture in a number of contexts and there are numerous references to God in this nation’s symbols, songs, mottos and oaths. This sign has the secular purpose of conveying a message of support, does not advance or inhibit religion or any particular faith, nor does it foster excessive government entanglement with religion.

As Michael Bongiorno, one of the people who contacted MRFF about the sign, notes,

Either this defense is simply a wink and nod to all of Col. Killeen’s Christian Marines, or else he truly believes that the expressions “God Bless,” “In God We Trust,” “Under God,” and “So Help Me God,” have no religious meaning whatsoever.

In order for this defense to work, one must believe that such seemingly religious statements are really entirely secular in nature. The Colonel is declaring to all of his Christian, Jewish, and Muslim troops that these maxims have absolutely no ground in theological belief. He is arguing that since they have been used so often they are now entirely secular and that they are, for all intents and purposes, meaningless.

It is patently absurd to argue that invoking a deity in blessing, swearing an oath to a god, etc., is anything but religious in nature. The god to whom people go looking for blessings or to whom they swear oaths in this context is not a generic god, not any random one of many gods, but a very specific one: the capital-g God of the Abrahamic faiths. And usually, the Christian version.

Since Colonel Killeen sees no issue with this disregard for the Establishment Clause, though, and if the sign doesn’t come down, MRFF is asking for equal footing on the base for a number of other viewpoints. Like pagans, Jews, atheists, and Hindus. And the Jedi Church. And Satanists.

… On behalf of MRFF’s Church of Satan clients under your command, our clients demand the immediate right to build and display the religious message board appearing in the pictures below which starts with the words “Satan Bless”

Something tells me that Colonel Killeen is unlikely to comply. Based on his previous response, it’s quite possible that Killeen could argue that, while blessings from God are totally secular in nature, invoking the Force or getting blessings from Satan would just be too religious.

If talking about God really is as secular a business as Colonel Killeen claims, maybe the atheist Facebook God is onto something.

October 18, 2015 Religion Journalist Offers Lazy Criticism of Richard Dawkins
Browse Our Archives
What Are Your Thoughts?leave a comment