Either Mike Huckabee doesn’t understand the Bible, which would go against his whole schtick, or he absolutely understands it, in which what he said recently was horrifying. 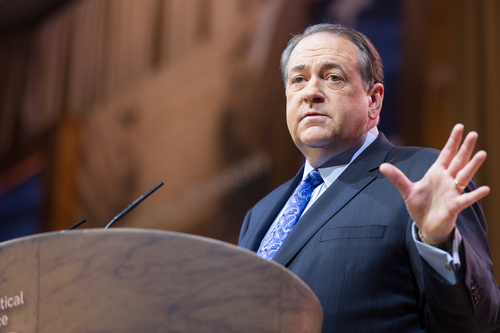 First, you should know the beginning of Exodus 22, which explains the consequences for theft:

“Whoever steals an ox or a sheep and slaughters it or sells it must pay back five head of cattle for the ox and four sheep for the sheep.

“Anyone who steals must certainly make restitution, but if they have nothing, they must be sold to pay for their theft.”

So if you steal something, you must pay for it. And if you can’t pay for it, you must be sold as a slave to work off your debt.

This week, radio host Jan Mickelson asked Huckabee about that passage, as a potential solution for our broken prison system… and the GOP President candidate took the bait:

Mickelson went on to argue why jails, which he claimed are a “pagan invention,” are inferior to slavery: “We indenture them and they have to spend their time not sitting on their stump in a jail cell, they’re supposed to be working off the debt.”

“Wouldn’t that be a better choice?” the host asked.

“Well, it really would be,” Huckabee replied without missing a beat. “Sometimes the best way to deal with a nonviolent criminal behavior is what you just suggested.”

That’s what we’d get with President Huckabee: A man who wants to bring back slavery for people who owe money but don’t have any.

He could have just said “No, that wouldn’t be a better choice,” but Huckabee can never bring himself to disagree with the Bible, no matter what bullshit is in there.

Have fun paying off those student loans, kids. (Remember: It could be much, much worse.)

(via Think Progress. Image via Christopher Halloran / Shutterstock.com. Thanks to Aaron for the link)

October 17, 2015
Pat Robertson Laments the "Organized Thrust" of Gay People Who Want to "Stick It" to Christians
Next Post