On last night’s episode of The Last Word, Lawrence O’Donnell interviewed Sam Harris and Maajid Nawaz about their new book about Islam. So if you like interviews where people aren’t shouting at each other, have at it: 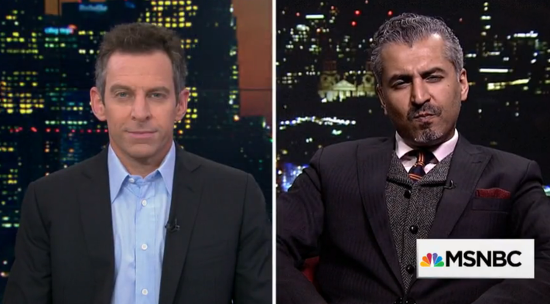 In short, Nawaz argues that Islam is not a religion of war or peace. It’s a religion.

If that sounds very close to what people who criticize them (like Reza Aslan) have said, you’d be right, but they go on to say there is a connection between beliefs and action. And when your beliefs are so irrational that they drive people to kill — as we saw with the Charlie Hebdo massacre — we have a problem, and that problem is specific to Islam right now.

The end of the interview features a great point by Nawaz about why he, unlike Dr. Ben Carson, would support a qualified Muslim American running for President.

If any parts stand out to you, please leave the timestamp/summary in the comments.

October 16, 2015 Teenager Beaten to Death Was Being Counseled by Church Members for His Supposed "Sins"
Browse Our Archives
What Are Your Thoughts?leave a comment