In 2012, Rodricus Crawford was convicted of killing his one-year-old son, Roderius. There’s been a lot written in Crawford’s defense — he may very well be innocent — but that hasn’t stopped Caddo District Attorney Dale Cox (below) from seeking the death penalty against him. 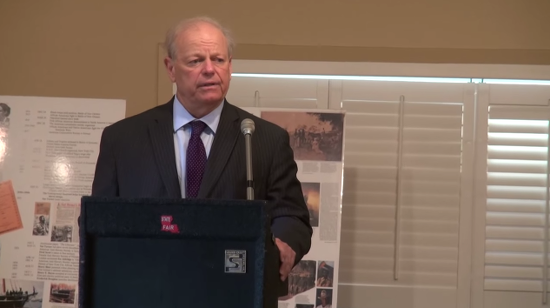 I’m going to skip over the facts of the case and focus on how it was argued. Cox defended his push for the death penalty by quoting the Bible in court, as if we’re guided by the Christian holy book in this country instead of the Constitution:

Under cross examination, Cox asked [Rev. John Dent Sr., a character witness] if he agreed that scripture attributed to Jesus Christ means “an earthly life should be terminated for harming a child.” Dent did not agree with Cox’s interpretation, the brief says.

In a second instance, Cox quoted the scripture again at the end of the penalty phase of the trial when the jury had been asked to decided between life in prison or death.

“He [Jesus Christ] said, to the adult, who would harm one of these, ‘one of these’ referring to small children, Woe be unto you, who would harm on of these,'” the brief quotes Cox as saying. “Now, this is the Jesus Christ of the New Testament. ‘It would be better if though you were never born. You shall have a millstone cast around your neck and you will be thrown into the sea.'”

None of this is relevant. But it’s the reasoning Cox used to put Crawford on death row.

Now, in a fantastic showing of interfaith cooperation, more than a hundred religious leaders have spoken out against Cox and the death penalty:

“This is unprecedented,” [Loyola University New Orleans law professor Bill] Quigley said. “We have never had 100 religious leaders in the state come out in a death penalty case, and I think it just shows how outrageous it. I think it shows a real critique of the prosecutorial conduct in Caddo Parish.”

If the Louisiana Supreme Court approves of Cox’s conduct, Quigley said the next step is to go to the U.S. Supreme Court.

Good for them and I hope Cox receives some sort of punishment before his Rambo Jesus fantasies take a potentially innocent man’s life.

October 16, 2015
10 Facts That Make Religion Interesting For Anyone
Next Post