I think Westboro Baptist Church is awful and I think Kim Davis is a bigot. But if the “God Hates Fags” people want to protest someone famous for denying gay people marriage licenses, there’s something deeply poetic about it in a weird, twisted way.

The church plans to picket outside the Rowan County Courthouse where Davis works on Monday morning because… well… just take a look at WBC’s rambling explanation: 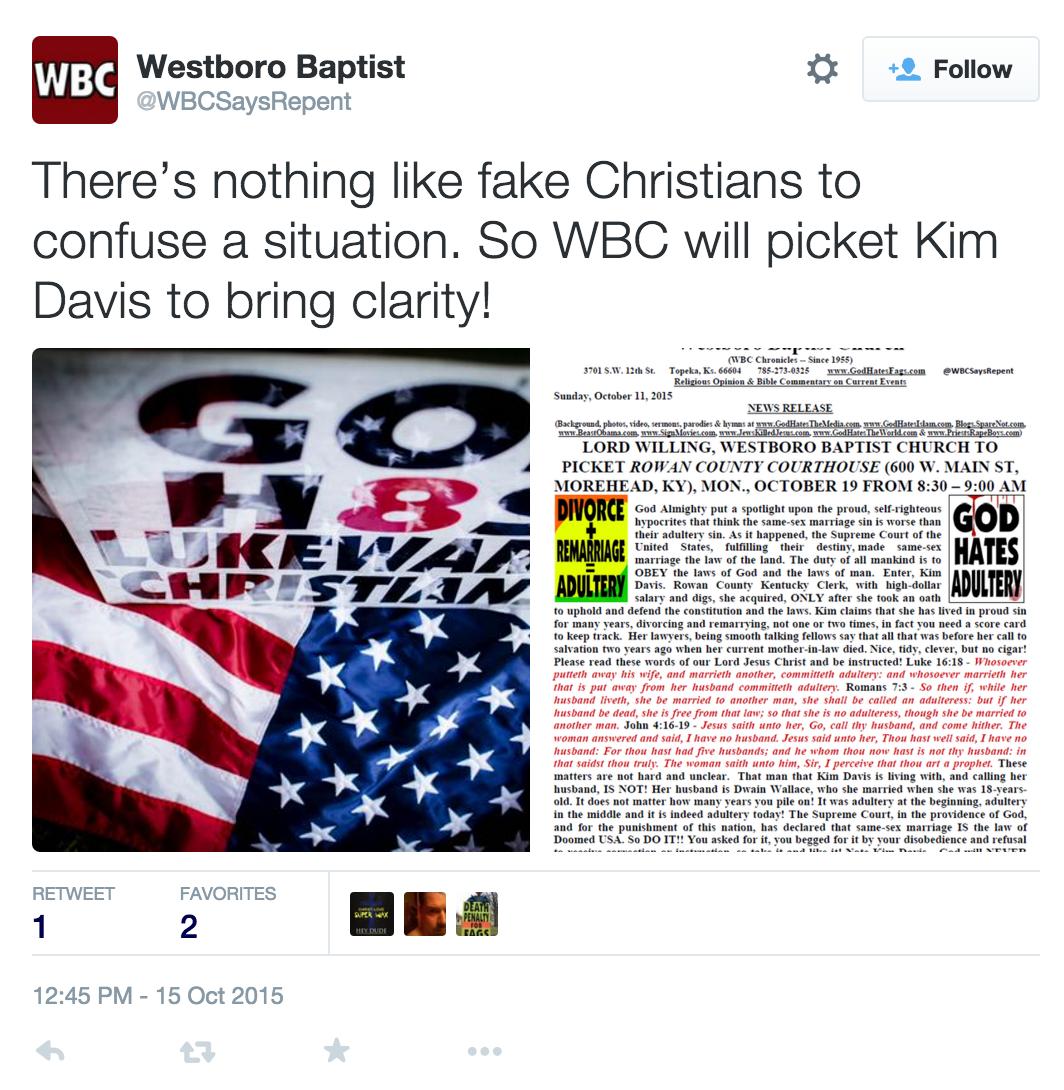 As it happened, the Supreme Court of the United States, fulfilling their destiny, made same-sex marriage the law of the land. The duty of all mankind is to OBEY the laws of God and the laws of man. Enter, Kim Davis. Rowan County Kentucky Clerk, with high-dollar salary and digs, she acquired, ONLY after she took an oath to uphold and defend the constitution and the laws. Kim claims that she has lived in proud sin for many years, divorcing and remarrying, not one time or two times, in fact you need a score card to keep track. Her lawyers, being smooth talking fellows say that all that was before her call to salvation two years ago when her current mother-in-law died.

Nice, tidy, cleaver, but no cigar!

… That man that Kim Davis is living with and calling her husband, IS NOT! Her husband is Dwain Wallace, who she married when she was 18-years-old. It does not matter how many years you pile on, it was adultery at the beginning and it was adultery in the middle and it is indeed adultery today!

Here’s where it gets really interesting. Westboro says Davis sinned because she committed adultery, and sin is what’s led God away from us, so they end up advocating for Davis to give gay people the licenses they deserve. She helped usher in this modern tragedy, they say, so she might as well reap what she sowed.

If Kim Davis received mercy from God and grace, as she claims, she would, with all due haste put her sin away. She would mourn for her sins, and in a show of great mercy, she would be busy apologizing to the fags for enabling them, and she would, with all diligence, give those perverts a marriage license.

The Supreme Court, in the providence of God, and for the punishment of this nation, has declared that same-sex marriage IS the law of Doomed USA. So DO IT!! You asked for it, you begged for it by your disobedience and refusal to receive correction or instruction, so take it and like it!

Just note Kim Davis … God will NEVER have Same-Sex Marriage, but he does not require YOU to disobey to deal with this nation. As these words are typed, the nation faces relentless, never-seen fires in the west and hurricane force never-seen flooding and storms in the east. AND, God sends the shooter again and again. God has HIS weapons in HIS armory, so Kim Davis needs to HUSH and OBEY the law that she helped bring about.

I don’t know whether to thank Westboro members for their support or be sickened by how multiple wrongs somehow made a right.

There’s something about the enemy of my enemy that I just can’t wrap my head around right now.

At least for once, there won’t be any talk about a counter-protest. The people who normally oppose Westboro aren’t about to defend Kim Davis. She’s on her own for this one.

October 15, 2015
A Skeptic Translates the Book of Genesis ("Begats" Included)
Next Post