Last month, after the Freedom From Religion Foundation asked police departments and sheriff’s offices around the country to remove “In God We Trust” stickers from vehicles, Childress Police Department Chief Adrian Garcia in Texas sent back a letter with a simple message: 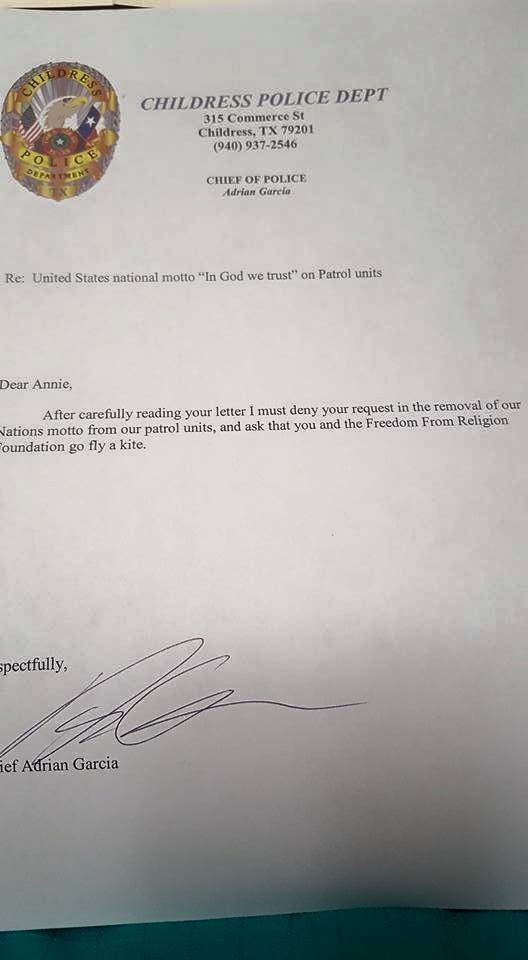 After carefully reading your letter I must deny your request in the removal of our nations motto from our patrol units, and ask that you and the Freedom From Religion Foundation go fly a kite.

Either way, Garcia’s words turned out to be inspiration for Hunt County Sheriff Randy Meeks (also in Texas). Meeks received the same letter from FFRF and had a message for them, too:

After a police chief in tells the Freedom from Religion Foundation that they can “go fly a kite,” an East Texas sheriff said he agrees, and he would tell the non-profit group to go “butt a stump.”

Meeks said hearing the controversy in Childress sparked the idea in him.

“I wish I’d thought of it first,” Meeks said. “We can give [officers] bulletproof vests, we can equip them with the best guns, but ultimately when they go out there in the field and risk their lives, it’s really in God’s hands.”

Well, it’s the opposite of being in God’s hands. It depends on the kind of situation the cops are in, and how much force the police want to use, and how the alleged criminals react, and…

Oh, who am I kidding. No one cares about that part of the comment. Let’s talk about what it means to “go butt a stump” because I have no fucking clue.

I know it’s a local saying, but I can’t figure out if he’s referring to something sexual, asking atheists to ram our heads into something solid, or just talking gibberish.

Feel free to enlighten me.

In the meantime, maybe FFRF should forget about these “In God We Trust” stickers and send these Texas officers some guidance on how to insult their opponents before another cop complains about how atheists are madder than a wet hen.

(Thanks to @ttirBilE for the link)

October 15, 2015 After Putting Their Faith in God, High School Football Team Goes Winless
Browse Our Archives
What Are Your Thoughts?leave a comment