What Did the Democrats Have to Say About God During the Debate? October 14, 2015 Hemant Mehta

What Did the Democrats Have to Say About God During the Debate?

The Democrats’ debate last night was certainly refreshing in one way: The candidates weren’t wasting time arguing about who God loved more. 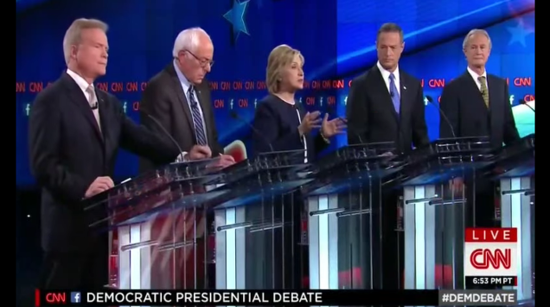 In fact, according to a transcript of the debate, “God” was only mentioned three times, all by Hillary Clinton who was referring to “God-given potential.”

What about “Christ”? That only came up once, sort of, during a question by one of the moderators:

JUAN CARLOS LOPEZ: Secretary Clinton, you told Christiane Amanpour you didn’t smoke pot when you were young, and you’re not going to start now.

In other words, no Jesus. No Christ. No sin. No saving, unless it was referring to jobs.

And religion only came up in Governor Martin O’Malley‘s closing remarks, when he was contrasting his colleagues with the GOP candidates:

None of the candidates are openly non-religious, but at least there weren’t any concerns about whether they would support separation of church and state. I would love to see them asked about what they plan to do with faith-based programs in the White House and how the IRS should handle politicking churches. Still, for just a night, God took a back seat to the actual issues. It doesn’t happen very often in U.S. politics. Enjoy it while it lasts.

October 14, 2015
Magnetic Energy Directed Into Your Brain Can Reduce Your Religious Beliefs, Say Researchers
Next Post