Last night, Stephen Colbert went after the anti-gay Christian group One Million Moms (which has just over 3,000 Twitter followers) for their overreaction to a delightful Campbell’s Soup ad featuring two gay dads: 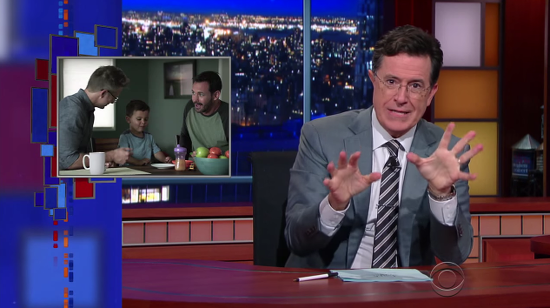 One Million Moms are furious that Campbell’s is being associated with gay men. Psst… nobody tell them about Andy Warhol.

Keep in mind that ad wasn’t advocating anything other than soup.

This is why Christians get nowhere with the “love the sinner, hate the sin” argument. That slogan doesn’t work when conservative Christians hate the “sinners,” too. Why is One Million Moms angry about Campbell’s ad? Because it shows gay people existing.

At least their boycotts are backfiring. No one takes them seriously. But what else did you expect with a group that lies in its own name?

October 14, 2015
Archbishop Sets Restrictions for When Priests Should Deny Communion to Catholics
Next Post