When you think of Christian theocrats on the Alabama Supreme Court, Chief Justice Roy Moore probably comes to mind first. He’s the guy who installed a Ten Commandments monument in the courthouse more than a decade ago. But many of the justices could easily fit the description. For example, Tom Parker, who also sits on the bench, believes the Bible supersedes the Constitution. 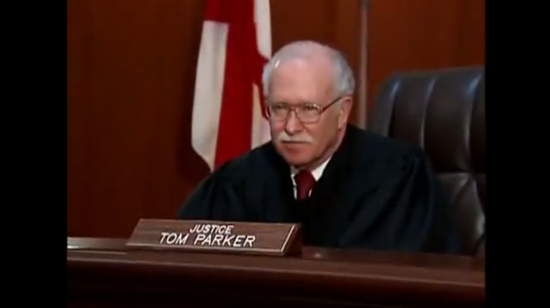 That alone wouldn’t disqualify him from the bench — Antonin Scalia is on the U.S. Supreme Court, after all — but Parker made comments on Bryan Fischer‘s radio show earlier this month that alluded to a case he’s supposed to be deciding (in an impartial way) very soon.

That’s why the Southern Poverty Law Center has filed a formal complaint against the justice:

In the interview, Parker not only discussed a marriage equality case pending before the Alabama Supreme Court — Ex parte State v. King — he voiced his personal opinion about the case and suggested that Alabama should defy the U.S. Supreme Court decision legalizing same-sex marriage in order to lead to a “revival of what we need in this country.”

The complaint was filed with the Judicial Inquiry Commission of Alabama, which could recommend that Parker face charges in the Alabama Court of the Judiciary.

“Tom Parker has a choice: He can be a judge or he can be an advocate, but he can’t be both,” said SPLC President Richard Cohen. “His comments were clearly unethical and driven by his ideological agenda, not his judicial responsibility.”

In the ethics complaint, the SPLC highlighted what Parker said on the show:

“… Well, Bryan, the federalist papers told us that the states should be a check on the federal government, so that’s what you’re talking about right there, and the proper organ within a state to do that, versus the U.S. Supreme Court, would be a state Supreme Court.

“I doubt that it would be a blanket defiance of all jurisdiction of the U.S. Supreme Court, but in regard to the Obergefell decision, where it’s clear that they jumped outside of all the precedents in order to impose their will on this country, [then] yes, resisting that decision could maybe [start] a revival of what we need in this country to return to our original founding principles.”

It’s worth noting that Parker once served as an aide to Moore before they were colleagues and he also worked at the Foundation for Moral Law, a faith-based religious liberties group. When he ran for re-election to the Supreme Court in 2010, a campaign ad included the slogan “fair and balanced”… in case you needed any reminder of where his allegiance lies.

It’s hard to tell what, if anything, the Judicial Inquiry Commission of Alabama will do with the complaint, but if no one says anything, nothing will change. Remember: Parker isn’t alone in his thinking. Many of those justices feel the exact same way.

Parker’s mistake may have been getting so comfortable in his position that he openly flaunted the way he ignores justice, admitting he just does whatever he thinks God wants him to do. And now he’s been caught in the act.

October 14, 2015
Richard Dawkins Chats with Trevor Noah on The Daily Show
Next Post