North Carolina School Board Urged by Christian Zealots to Have Prayers at Meetings October 13, 2015 Hemant Mehta

Last night, at a meeting of the Cleveland County School Board in North Carolina, the issue of prayer came up. Right now, there’s a moment of silence during meetings — which is perfectly legal, albeit a complete waste of time — but that isn’t good enough for some people.

The Cleveland County Christian Law Enforcement Association showed up to make the case that the board needed — wait for it — Christian prayers. 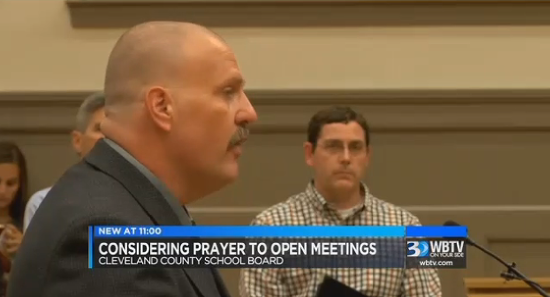 “We think God should be in our lives,” Cleveland County Sheriff’s Office Captain Joel Shores said. “And in everything we do. And we are seeing these progressives try to slowly remove everything that our what we feel our forefathers fought for.”

Shores told WBTV he would be at Monday night’s board meeting requesting board members to pray before meetings. He said he believed the moment of silence already observed is not good enough.

“It’s time for Christians to stand up.” Shores said.

Which also implies that non-Christians should sit down and shut the hell up.

I wish I could tell you that’s the reason every board member voted against the idea of prayers at meetings, but they fell back on the excuse of “We don’t want to get sued.”

Cleveland County School Board Chair Phillip Glover tells WBTV the board decided to do moment of silence so lawsuits wouldn’t come their way.

“With all the budget issues that we have,” Glover said. “Could you justify spending that kind of money to fight a fight that you probably won’t win anyhow with the high courts.”

Whatever allows him to save face, I guess.

Another board member disagreed for a very different reason:

Board member Jerry Hoyle said he’s worried about potential lawsuits and their expense. Hoyle also said he did not want to give members of non-Christian faiths a platform to speak or pray in front of children at the meetings.

The board shot down the prayer proposal 8-2, but they said they would explore the issue more before November’s meeting.

Let me help them out. Prayers at school board meetings (unlike prayers at city council meetings) are illegal. The debate here isn’t whether people of all faiths and no faith would be allowed to lead the prayer, as some speculate. It’s just a no-go from the get-go. Students are present. There’s coercion involved. If they allow prayer, there will be a lawsuit, and the School District will lose.

No Christian Right legal group will pay those bills on the District’s behalf, I promise you that, but they’ll all line up to play lawyer for free and get all the publicity and donations that come with it.

(Image via WBTV. Thanks to Brian for the link)

October 13, 2015 I'm an Atheist and I Attend Umpqua Community College
Browse Our Archives
What Are Your Thoughts?leave a comment