I’m an Atheist and I Attend Umpqua Community College

This is a guest post by Alex Duvall. She blogs at Atheist Journeys.

My name is Alex and I attend Umpqua Community College.

I was not there on the day of the shooting, though I was scheduled to attend an afternoon class later that day. My contribution in the chaos was making and constantly updating an extensive list of survivors, which was passed around Facebook from my personal page and from a separate page which I made especially for it. From the comments I saw, that gesture seemed to help a lot of people, so I’m grateful I could help out in some small way.

I did not know the shooter or any of the victims, though I know people who knew the shooter well, and they are very shaken up about it. I also was cast in a play in which the shooter was supposed to be a production assistant. When my mother found that out last week, she had to go lie down for a while.

In the past few days, I have seen a lot of people online passing around this cartoon claiming that God can’t prevent school shootings because he’s not allowed in school: 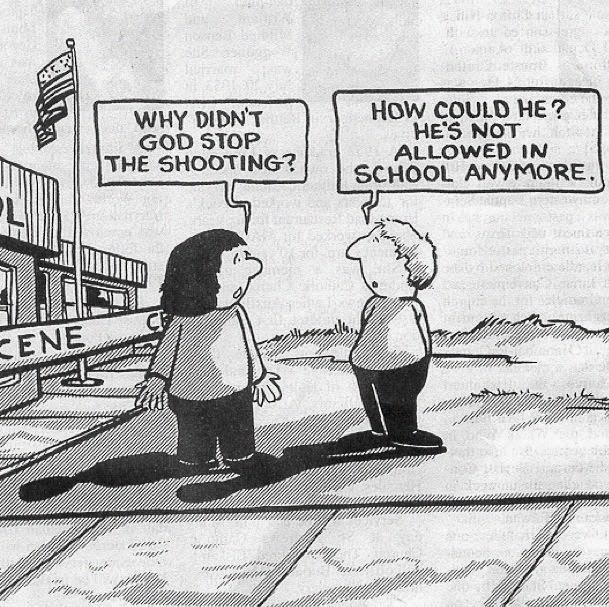 But you should know that none of the people passing it around seem to be associated with Umpqua in any way. They don’t know our school.

Roseburg, Oregon is not the Bible Belt, but it is a very Christian town. We have at least three billboards on the freeway telling us about Jesus and referring people to a number or website to learn more.

Here is one that was up a few years ago (though the current ones are rather generic evangelizing signs and not as funny/weird as this one): 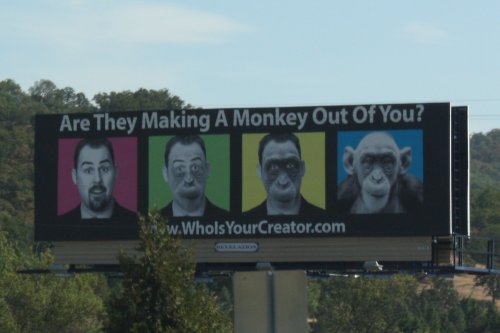 It’s not unusual in our town to see crosses similar to this one: 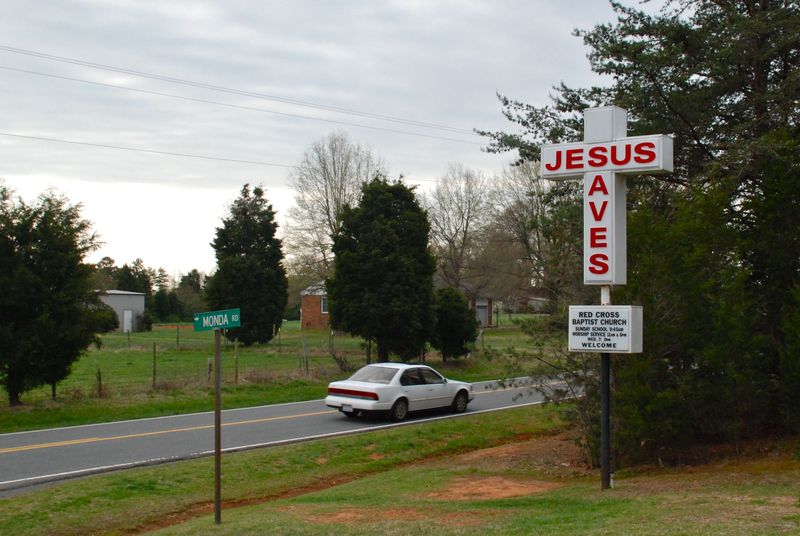 There is also a large cross on nearby Mount Nebo, which is lit up every year around Christmastime.

Roseburg is a very Christian community, and Umpqua Community College is no different. Most of the people I know from UCC are Christians, or at least have some kind of faith or spirituality.

Some people may say that this is why the school was targeted, however that goes against the cartoon above. So which is it? Are we too Christian or not Christian enough?

Obviously, it doesn’t matter very much since I don’t believe God would have the ability to protect His children, but I want to make very clear that belief in God was everywhere and it didn’t prevent the attack.

There are also atheists on campus, and I’m one of them. I tried starting an atheist group on campus last year until my schedule conflicted with my efforts. That required getting a certain number of signatures on a petition. (If you signed it, it didn’t necessarily mean that you were an atheist, only that you supported the club’s existence.)

When the shooting happened, I looked over that petition again. None of the names on it matched the victims or the shooter.

While my group didn’t take off, I have been more involved lately with the UCC Gay-Straight Alliance and a Roseburg chapter of PFLAG (Parents, Families and Friends of Lesbians and Gays), of which I am also a board member. Both groups are preparing to meet the Westboro Baptist Church (the “God Hates Fags” people) when they come to protest the funerals of the shooting victims.

I do not know if attitudes towards atheists (or towards religious people, for that matter), at UCC or in the Roseburg area, will change in any way now, as it is so soon after the fact. I imagine that there will be more talk of requests for prayers for our community and the victims’ families. I am not really bothered by that, at least to a reasonable extent, because the people of Roseburg and Douglas County, in general, are very good at pitching in to help each other as well as praying. It doesn’t change what happened at all, and I don’t think prayer really does anything, but it is a tiny bit comforting, at least to me, that so many people care.

Even though I wasn’t in the vicinity of the shooting, I feel very lucky right now… and something inside me has changed.

That’s not to say, however, that I’m religious. I don’t “hate” God either. If anything, the tragedy confirms to me that there may not be someone watching over us and we need to look out for each other.

October 13, 2015
North Carolina School Board Urged by Christian Zealots to Have Prayers at Meetings
Next Post