Here’s how sneaky some Bible-believing groups are when it comes to luring children to their meetings: A California father says his daughter was tricked into attending an after-school Christian club that functioned under the guise of a leadership group.

Here’s the pamphlet his daughter was given: 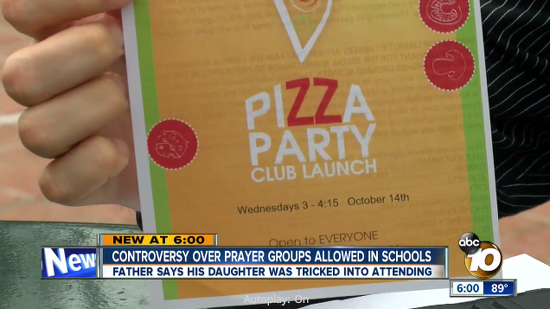 “Honestly, my first reaction when my daughter told me that was, these men lured them into the room, what is going on here?” said [Justin] Burns.

Burns is unhappy about what he said the prayer leaders did to get children to attend.

“They plied the children with Rice Krispies treats, candies and sodas to come and play these games,” he said.

Burns said his daughter wouldn’t have gone if she knew what the meeting was about. He said she was told it was a leadership group.

Higher Ground, the group running the event, said that they assumed all kids had a permission slip with them. Which they clearly didn’t bother checking. Because Jesus.

Here’s what I’d like to know: Why are Christian clubs like this one not saying up front what they believe in and what they want kids to believe? Are they ashamed of their message or are they trying to get kids who don’t know any better to sign up before their parents find out what’s really going on?

If any non-Christian group used the same tactics, does anyone seriously believe Christians would be okay with it?

Maybe PRIDE Academy needs a Young Skeptics group to counter the creepy nature of whatever these Christians are doing.

(Image via 10News. Thanks to Alexis for the link)

October 13, 2015 Mississippi History Teacher Tells Students That Atheists Are Fools
Browse Our Archives
What Are Your Thoughts?leave a comment