If you were to visit the Norwalk City Hall in Ohio, you’d see a Ten Commandments monument outside the building: 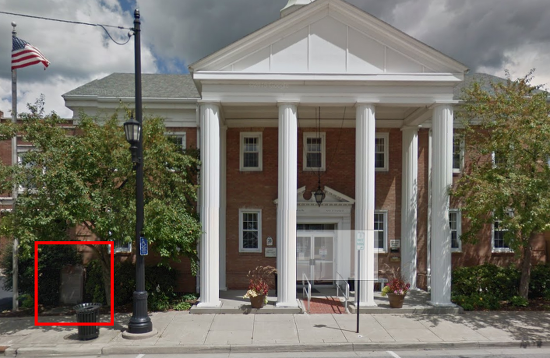 Why is it there? (Does it matter?) Either way, it’s government promotion of Christianity.

Not that the local leaders care. In their minds, no one’s ever complained about it, so that makes it okay:

“Quite candidly, over the years, the only people who have ever brought this up have been reporters,” said Steve Euton, city council president.

”No, I haven’t heard much about it,“ Mayor Rob Duncan said Thursday.

”Personally, I have no problem with it,“ the mayor added.

The mayor said the issue of the Ten Commandments is not a hot topic on the campaign trail. ”I’ve never heard anything about that,“ he said. “No one has ever brought it to my attention,” Councilman David Wallace said.

It’s possible people haven’t spoken up out of fear of retaliation.

But when that happens, let’s all remember how the officials aren’t even trying to pass this off as some secular basis of law. It’s very obviously a Christian symbol to them:

“When I was working at the fire department, I would see them every day I worked,” [Wallace] added. “I am proud they are there and I would fight tooth and nail to keep it there. Our country was founded on Judeo-Christian values.”

”I like them there and hope they always stay there,“ Councilman Stephen Schumm said. ”That’s because I’m a person who really believes in the Ten Commandments.

“I think that is what our country was founded upon,” Schumm added.

Our nation wasn’t founded on killing people who don’t worship the Christian God, or who don’t rest on the Sabbath, or who take God’s name in vain.

We’re much, much better than that.

Still, just in case there’s someone in the Norwalk area who may have a problem with the monument, I would advise them to contact a church/state separation group.

(Image via Google Maps. Thanks to Brian for the link)