Shepherd Bushiri is a self-proclaimed Christian “prophet” who has supernatural powers… that a child could debunk.

His most recent trick — the one that’s making headlines — involves him floating in air for a few seconds. 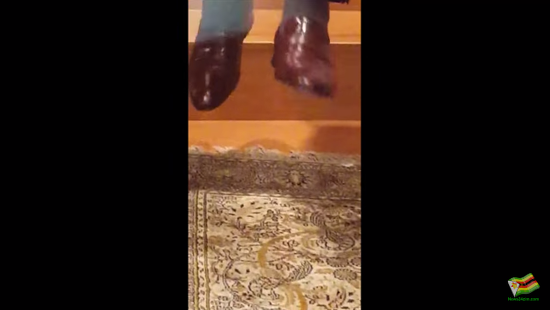 (Christians: Every time you use vertical videos, I assume everything in it is bullshit. See: Feuerstein, Joshua.)

Bushiri’s video doesn’t ever pan out when he’s floating… presumably so you can’t see the person helping him with the trick. But you do see the helper’s shadow after Bushiri lands… and a door slamming shut in the distance, as if someone was rushing to get out of the camera shot.

If you’re not convinced of the bullshit, you’re gonna love this one: Earlier this year, Bushiri told his congregation he would use an iPad to take a picture of an unseen spirit in the church.

He ended up showing them a picture already in the photo gallery.

Have I mentioned that Bushiri claims to own a private jet that no one has ever seen?

Leo Igwe, a skeptic who’s called out Bushiri on his claims, also wants to know why the “prophet” claimed to cure two people of their HIV but hasn’t extended those powers to anyone else:

In a country and region that is ravaged by HIV/AIDS, this reckless claim could undermine efforts to combat this deadly virus. So critical thinking people in the region should challenge Bushiri and get him to demonstrate the efficacy and veracity of his claims or be sanctioned.

It’s all bullshit. It’s obviously bullshit. But because Bushiri does his magic tricks under the guise of God’s Will, Bible believers buy the bull.

And the so-called “prophet” will keep getting richer.