Christian Cross Atop Kentucky Water Tower Must Come Down

What the hell is the town of Wilmore, Kentucky thinking by doing this with the water tower? 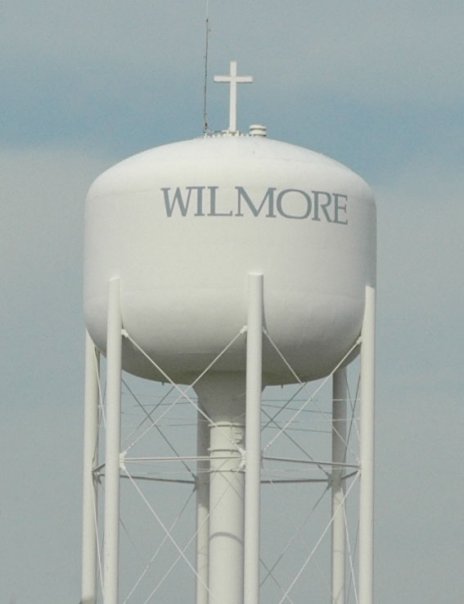 The Freedom From Religion Foundation would love to know:

“We are aware that the water tower itself stands on the campus of Asbury University, a private Christian college, but this is irrelevant,” [FFRF attorney Rebecca] Markert continued. “Any reasonable observer would understand the city to endorse any messages on the water tower because the water tower has ‘WILMORE’ printed on it in large letters, and because the tower is displayed on the city’s website to represent the city’s water and sewage services.”

Apparently, the tower was once under the college’s control, but when it transferred ownership to the city, they demanded the cross remain in place, as if that should make a difference. (Would Bible verses and a giant picture of Jesus be allowed, too?)

And look at how Mayor Harold Rainwater is handling FFRF’s letter, which he first saw via email:

“To be honest with you, I look at an email as spam. That is not the way you contact someone in a legal position,” he said. “I’m trying not to underestimate this and I am trying to take it seriously. I don’t underestimate the reach of well-funded liberal agendas. I have to respond at some point. When I get a subpoena or I get served, then I know I have to respond … but I’m not going to take a cross down because of an email.”

The FFRF email sent to Rainwater states that a copy of the formal letter was also mailed to the city.

There’s a responsible mayor for you: These people contacted me about a potential legal problem in my city, but I didn’t pay attention because I only listen to barbershop quartets.

It’s hard to see how this cross remains in place. There’s no reason it can’t just be given to the Christian college. Do it, Rainwater. Save the taxpayers money. The right-wing lawyers aren’t going to pay FFRF’s legal fees when you lose. Jesus isn’t going to send you to Special Heaven for fighting this one.

October 10, 2015 ESPN's Outside the Lines Discusses Arian Foster's Atheism
"Sounds like a "Plot" to me."
Grant Jackson Franklin Graham Falsely Claims Christians Weren’t ..."
"Multiculturalism is just a fact. Not even all white people with Anglo last names share ..."
smrnda Franklin Graham Falsely Claims Christians Weren’t ..."
"Oh no, the voices in their heads lyed."
John Norris These Christians All Predicted Trump’s Second ..."
"Putting incompetents in charge of things is Republican strategy.Set government up to fail then claim ..."
InDogITrust Atheists Sue Ex-Education Secretary Betsy DeVos for ..."
Browse Our Archives
What Are Your Thoughts?leave a comment