In a stunning interview on Egyptian television, singer Shams (a.k.a. Shams Bandar or Shams the Kuwaiti) told a host that Arab countries need to stop blaming the United States for their problems. After all, the U.S. has only been around for less than 300 years. Meanwhile, “for 1,400 years, we have been slaughtering one another, just because one of us prays one way and another prays a different way.” 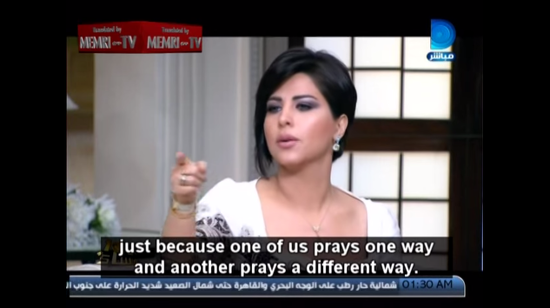 … in Britain or America, note that I am against the policies of their governments. I always say so. But show me where it says in their Constitutions that you can chop people’s hands off, stone people, execute them in the streets, or do all the things done by ISIS and the Islamist movements, which are harmful to Islam.

Do you see in the American Constitution and law any of the things perpetrated by our Muslims? Can we say that they do these things in the West, too? Why would they, when their Constitutions are all about respect for humanity?

Can anyone convince me that in America or Europe, they do what ISIS is doing to the Syrians, to the Yazidis, or to the Iraqis? Why do we pin all our problems on the West? For 1,400 years, we have been slaughtering one another, just because one of us prays one way and another prays a different way. America wasn’t around 1,400 years ago. It wasn’t around even 300 years ago. We have been fighting and shedding blood for 1,400 years, and now we are blaming American and Britain?

Wow. Is she safe? Can someone make sure she’s safe? I’m worried about her.

October 9, 2015 Ben Carson Blames Jews and Low Gun Ownership for the Holocaust
Browse Our Archives
What Are Your Thoughts?leave a comment