The U.S. is no stranger to religious extremist politicians. For goodness’ sake — a full third of the remaining GOP candidates for President could easily fit the bill. But every once in a while, a faithful candidate will come along who’s a special kind of special. Such is the case with Florida’s Augustus Sol Invictus. 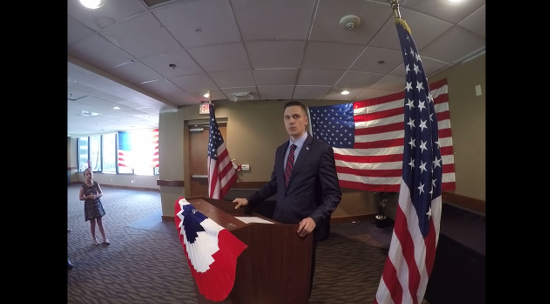 The Libertarian candidate for the Senate is certainly a colorful figure — a pagan practitioner described on his own website as a “radical philosopher and infamous social critic.” Others within his party disagree with that characterization. In fact, the Chairman of the Libertarian Party of Florida disagrees so much that he has now tendered his resignation.

As the Orlando Sentinel reports:

Adrian Wyllie, who was the Libertarian candidate for governor last year, says Invictus wants to lead a civil war, is trying to recruit neo-Nazis to the party and brutally and sadistically dismembered a goat.

It’s an awkward situation for the small party that’s trying to gain clout.

“He is the absolute exact opposite of a Libertarian. He’s a self-proclaimed fascist. He’s promoting a second civil war,” Wyllie said. “It’s absolute insanity. We must explain to people this is the opposite of Libertarians. This guy has no place in the Libertarian Party.”

Invictus swears the allegations aren’t true, but for those with the stomach to listen to one of his recent speeches, it’s hard to believe him.

Invictus passionately declared in that video:

Our founding fathers were not mere talking heads or political pundits. They’re not the sort of activists we see waving signs in front of city hall today. These were powerful men who petitioned their government in vain. They were men of action who, failing to gain the respect of their government, took up arms against it. Where are these men of action today? Where are these men of action now? Have we such a just government today that it deserves our dog-like obedience. I ask you all, are we lesser men than our forefathers? Have we lost our revolutionary spirit? God forbid. For if we have, we no longer deserve the name of Americans.

How much easier is it to donate and to volunteer and to knock on doors and vote than to bear arms?

That’s not the first time the would-be politician has called for violence, either. After renouncing his citizenship in 2013, he proclaimed:

I have prophesied for years that I was born for a Great War; that if I did not witness the coming of the Second American Civil War I would begin it myself. Mark Well: That day is fast coming upon you. On the New Moon of May, I shall disappear into the Wilderness. I will return bearing Revolution, or I will not return at all.

As if it weren’t enough to be calling for a new civil war, Invictus himself admits that there’s more to his past that may make voters wary in the video above, saying:

You will without doubt hear much about my past and my religion, about my indulgences and my failures, about my ruthlessness and my indiscretions, and the things you hear may well be true. You say you want an honest politician. Here I am. These attacks will do nothing to me personally, but I must warn you of the effect they may have on you.

What sorts of stories is he talking about?

One particularly juicy one that comes to mind is his assertion that he walked from Florida to the Mojave Desert and, afterwards, sacrificed a goat and drank its blood in celebration. Gross, but not technically disqualifying, right? The bigger story may relate to DEA action against his family’s pharmacy in 2006 that forced them to shut it down. Details on the action have been hard to come by, due in no small part to the fact that Augustus Sol Invictus (or “majestic unconquered sun”) is not his birth name, and he refuses to reveal what that might be.

October 9, 2015
It's Blasphemous and Now I'm Hungry
Next Post

October 9, 2015 Saudi-Born Singer Criticizes Arab Countries for Blaming the West for Their Longstanding Problems
Browse Our Archives
What Are Your Thoughts?leave a comment