If there’s one thing the Catholic Church has had to learn the hard way over the past decade, it’s the power of PR. Following the Boston Globe‘s now infamous exposé of sexual abuse by members of the clergy and the lengths to which the Church went to cover it up, Catholic Church leaders found themselves in the middle of a storm. They scrambled to make things right. They issued apologies. They created an anti-abuse counsel. The promised to do better.

But have they really? Recent events suggest otherwise.

Controversy over the appointment of a Bishop in Chile has been brewing since earlier this year when the Church chose to ordain Juan Barros in Osorno. The choice was controversial, as Barros was a protégé of the now disgraced Fernando Karadima, who, in 2011, was sanctioned by the Vatican and sentenced to a life of “penance” after proof of that he sexually abused teenage boys came to light. Barros, despite the Vatican insisting otherwise, has long been suspected of covering up Karadima’s abuse, especially after documents were leaked detailing some of the efforts made to conceal it from the public. While Barros is not explicitly indicted in those documents, testimony of the abused paired with those revelations made the case against him much stronger.

Pope Francis has struggled mightily to assure the public that the Church takes abuse seriously as protesters expressed fierce opposition to the move. Not helping matters is the fact his own sex abuse counsel stood in opposition to Barros’ appointment.

But most damaging to his efforts in saving face may be a video that recently surfaced of the Pope expressing his true feelings about the situation. 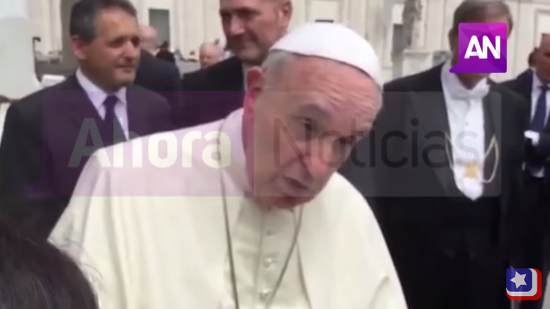 As the New York Times reports:

Many watched in disbelief: There he was, Pope Francis, calling people in Osorno, a city in southern Chile, “dumb” for protesting against a bishop accused of being complicit in clerical sexual abuse.

“The Osorno community is suffering because it’s dumb,” Pope Francis told a group of tourists on St. Peter’s Square in Vatican City, because it “has let its head be filled with what politicians say, judging a bishop without any proof.”

“Don’t be led by the nose by the leftists who orchestrated all of this,” the pope said.

The video, filmed by an Argentine tourist in May, was obtained by a Chilean television station and broadcast Friday, quickly instilling doubts here about the pope’s commitment to protecting victims of sexual abuse.

The whole situation has become a three-ring circus and PR nightmare for the beleaguered Church. Could no one foresee that an individual closely tied with a child abuser might be considered a problem with the public? Did no one realize that Church leaders ignoring the counsel that was tasked with making them look proactive about abuse at the hands of clergy could raise questions about how seriously the Church takes this issue? Did the Pope not consider that calling those concerned about abuse “dumb” would make him look callous on the subject?

Even if Barros truly had no knowledge of the abuse, Catholic appointments are often inherently political, and this ordination was incredibly poor calculus by the Church. Not helping matters is that this revelation comes on the heels of a priest being fired for expressing sympathy for pedophiles. As the Barros/Karadima story gets pushed to the forefront once more, the juxtaposition of firing someone who expressed sympathy but merely sanctioned an actual abuser shines an even more grotesque light on the workings of the Church.

The clear takeaway is that the Church is going to have to start walking the walk on all their talk of stopping sexual abuse. Until then, that black eye delivered by the Boston Globe back in 2003 will continue to be the shiner that doesn’t fade.

October 8, 2015
A Day Later, the Christian Who Predicted Armageddon Says It's "Obvious That We Were Incorrect"
Next Post