Two years ago, I posted about how nomadic fire-and-brimstone campus preacher Brother Jed Smock would soon be starring with his family in a reality TV show. Like any show, there was only promise of a pilot episode (which is no guarantee of a series or that the pilot would even air on television). But it made sense, I guess. Reality TV and fundamentalist Christians go hand in hand. Between Duck Dynasty, the Duggar family, Teen Exorcists, and Snake Salvation, this couldn’t really be worse, could it?

That’s why you’ll all be excited to know the pilot episode of The Book of Jed is now online. In this episode — no joke — “one of Jed’s five daughters brings a boy home from college… it’s a disaster when Jed discovers the boy is secretly an atheist.”

Get ready for the most awkward Netflix and chill session of your life: 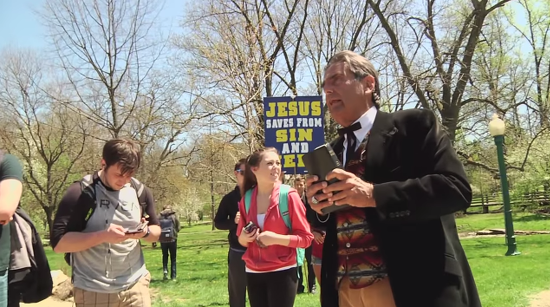 Also fun? His daughter’s confessional: “Dad goes to talk to this guy down the street about this car that’s for sale. And I guess it didn’t end up too well. I think that he may or may not have called the guy’s daughter a whore, so…”

Most shocking part of the pilot for me? Smock wears his preaching suit at home during dinner.

The show was originally slated to air on CMT (a.k.a. Country Music Television) but there’s no word yet on whether the show will ever see the light of day.