The Keller City Council in Texas has invocation prayers at meetings. It’s legal, so we have to live with it, but it doesn’t mean we can’t participate.

That’s why, last year, my friend Zach Moore of the Keller Humanists requested to deliver one of those invocations. Mayor Mark Matthews initially said no to him, but eventually relented at the request of the pastor who coordinated the speakers.

There was just one caveat: Moore could speak… but only if he was followed by a Christian speaker.

In other words, they weren’t going to have a meeting without a Christian prayer. It’s like saying, “You can say what you want… but I’m always going after you in order to have the last word.” 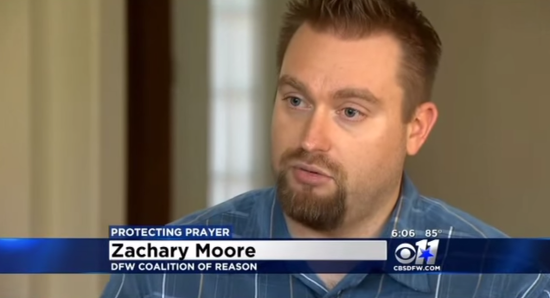 It happened as recently as August:

For that reason, the Freedom From Religion Foundation sent a letter to Mayor Mathews earlier this month explaining why this was illegal:

A nonbeliever who gives the opening invocation must not be treated as a second-class citizen by having his or her message openly undermined by a Christian pastor who represents the Council.

Last night, Moore was against scheduled to deliver the invocation. And Pastor John Salvesen was right there to clean up his supposed mess.

But that’s not what happened. Instead of allowing one or both of them to speak, Mayor Mathews refused to let either man at the podium.

Here’s how Zach described it to me:

As it happens, the Mayor decided to make a last-minute change prior to the meeting tonight, informing me seconds before the start of the agenda that he was going to cancel both my and Pastor Salvesen’s invocations. Instead, he gave an explicitly Christian prayer from the bench as Mayor.

A local news station did a story about the incident, but there’s no indication that what the Mayor did was illegal or that this would happen again in the future.

There was an interesting remark from Pastor Salvesen, who said that if, say, a Muslim delivered the invocation, he wouldn’t follow it up with a Christian prayer: “You can pray in the name of Jesus, in the name of Allah, or anything else. Any other deity… But Mr. Moore does not provide a prayer.”

He only has to clean up after atheists, I guess.

Make no mistake: What the city council is doing goes against what courts have said is legal. No government reps should be offering a religious prayer. And if they’re going to have an invocation, it must be open to people of any or no religious background. Some cities have tried to work around this by saying invocations can only be delivered by groups that have a physical presence in the area (like a church), effectively blocking out minority groups, but even those are contested in court.

Zach has informed FFRF of what happened last night. This battle is far from over.

October 7, 2015
This New Book Introduces Evolution to Preschoolers
Next Post