“In God We Trust” is Now Displayed on Ambulances in Texas October 7, 2015 Hemant Mehta

“In God We Trust” is Now Displayed on Ambulances in Texas

It was bad enough when the police departments and sheriffs’ offices did it. Now, in Lamesa, Texas, medical professionals are inadvertently throwing up their hands in surrender and telling patients to put their faith in God’s hands. 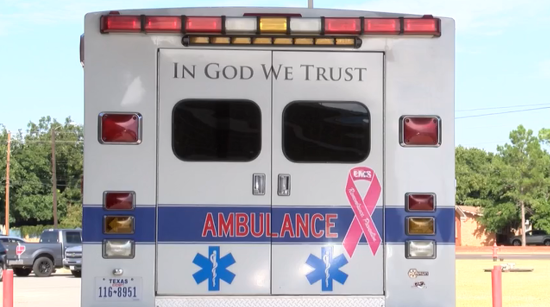 Leitha Stokes, CEO for Medical Arts Hospital said this decision to place “In God We Trust” on the first responder vehicles was one she made and everyone at the hospital stands for.

“I just looked at my EMS crew and I said while you have these units up there please have ‘In God We Trust’ put on the back and ask if they can do it on the inside,” said Stokes.

“We believe that the words ‘In God We Trust’ are watching over the patients as we transport them, it was a decision truly for the patients and also on the inside of the vehicles we have those words so as the patient is being transported they can look at that,” said Stokes.

“People who have not prayed before, in the ambulance they’ll pray,” said [EMS Director at Medical Arts Hospital Joey] Parks.

As if there are no atheists in ambulances…

How does Stokes even know everyone at the hospital agrees with her? Was there a survey? Did she ask them their religious preferences when she hired them? Is it even possible that some of them may have lied just to avoid rocking the boat?

And why don’t they put up another decal that says “We can’t do our jobs”? If I’m ever in a medical emergency, I want skilled workers doing everything in their power to help me. The last thing I want are medical technicians telling me to trust God. You’re trained professionals! Do your jobs! Don’t pass the buck to a Higher Power who can’t help me!

This is a dumb idea, even for Texas.

(Screenshot via KLBK. Thanks to Kevin for the link)