An Arkansas High School is Allowing Students to Pray Over the Loudspeakers at Football Games October 7, 2015 Hemant Mehta

Ashdown High School in Arkansas has a problem with prayer.

It’s not that a lot of kids want to say them. That’s not an issue. That’s never been an issue. The problem is that everyone in the community seems to have no clue where to draw the line. They thought it was okay for the band director to lead the prayers. It’s not.

So the Freedom From Religion Foundation sent them a letter at the behest of someone in the District (as is always the case; they don’t do these things on a whim). That seems to have stopped the band director’s involvement… but there’s still a problem: 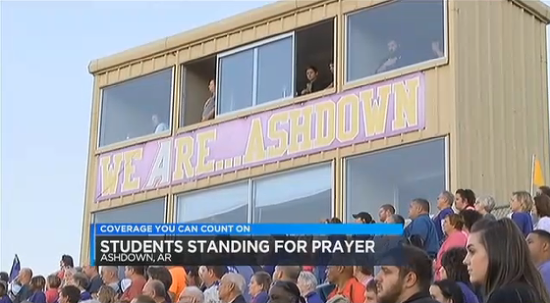 “We are not going to stop any student who wants to exercise their freedom of religious expression such as a prayer,” explained Ashdown School Superintendent Jason Sanders.

Sanders said in the past, people working the press box would offer prayer, but this past Friday, a representative of a student group did the honors.

“As for the situation Friday night, I think that is a great example of student freedom and the rights of students to express themselves religiously and the government not get involved and keep them from doing that,” said Sanders.

This is still a problem. While students can pray on their own, when they’re announcing these prayers from the loudspeakers, they’re basically speaking on behalf of the school.

This isn’t some subtle law, either. The Supreme Court of the United States said exactly this in Santa Fe Independent School District v. Doe (2000). Here’s the Wikipedia summary:

It ruled that a policy permitting student-led, student-initiated prayer at high school football games violates the Establishment Clause of the First Amendment… The court announced its decision on June 19, holding the policy unconstitutional in a 6–3 decision.

The Santa Fe Independent School District (SFISD), a rural school district in Texas between the cities of Houston and Galveston, allowed students to offer Christian prayers over the public address system at home football games. These prayers were given by an elected student chaplain.

For anyone to tell them this is okay is simply lying to them and it’s going to cost the taxpayers a lot of money when the District gets sued. Who is giving them all this bad advice?

School Superintendent Jason Sanders said he’d consulted the Alliance for Defending Freedom, a group founded by right-wing evangelists that promotes prayer at public events, and said the district had been assured what the district was doing was legal.

There we go. A group that’s virtually identical to Liberty Counsel, the group that said Kim Davis was within her right as a government official to discriminate against people based on their sexual orientation. A group that thrives on publicity, with no regard for which school districts they’re screwing over with their bad advice.

Remember: The ADF will tell these Districts they’ll defend them for free… but if the District loses the case — and they will lose this case — then it’s the taxpayers who will be on the hook for the other side’s legal fees. ADF isn’t going to help out with that.

My favorite part of the news reports about this story have to be the interviews with random residents who have no legal knowledge but know in their hearts how important these prayers are.

Pat and Susy Dillenger live across the street from Ashdown High School and say they are avid Panther fans. For them, the idea of stopping prayer at school athletic events is inconceivable.

“Always had prayer at every game. You know, it’s terrible when somebody can come from way up north to tell you what you can do down here at your school,” said the Dillengers.

FFRF isn’t coming down from the north just to attack the school. They’re acting on behalf of someone in the District who, for very good reason, doesn’t want his or her name made public.

The Alliance Defending Freedom, by the way, is based out of Arizona.

But they’re from the west. So I guess that’s okay.

“I believe we should keep praying. If they don’t want to listen, they can just leave,” said Ashdown resident Gerald McElhenon.

They’re already in the goddamn north!

Look: I don’t expect the locals to know how this works. They’re allowed to be ignorant. The administrators, on the other hand, are supposed to be aware of the law. They’re the ones who are sticking their fingers in their ears pretending everything is okay. They’re the ones who deserve the blame if a lawsuit goes forward.

October 7, 2015
Texas City Council Only Lets Atheists Deliver Invocations if a Christian Gets To Pray Afterwards
Next Post

October 7, 2015 eBible Fellowship Warns the World Will End... Today
Browse Our Archives
What Are Your Thoughts?leave a comment