Sunday’s episode of CNN’s news program Reliable Sources was mostly interesting, focusing on the dramatic decrease in media reporting of the Oregon college shooter’s name and face. This was a response to the gunman making clear he did this for fame, after wistfully writing online of the limelight won by other high-profile murderers. I expect this to be a trend for the future as we belatedly catch on to the problem.

But then, the usually reliable host Brian Stelter had this to say: 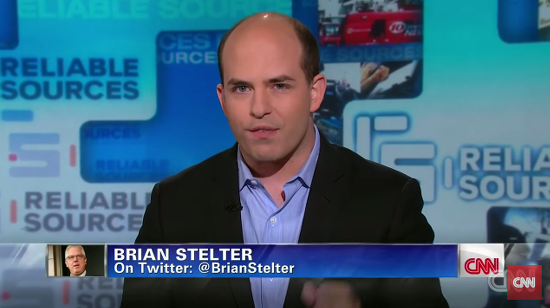 So much misinformation in that one bolded phrase. It’s unfortunate that Stelter’s zeal to debunk unfounded rumors tarnishing Islam ended up deflecting wrongly to atheism. The claims that the gunman was an atheist who targeted the religious are, to this date, unsupported by the evidence.

Were the victims in fact Christians?

There is a massive narrative in media and in Christian communities that the victims were all Christians, with social media filled with references to the “nine Christian martyrs” that at least one presidential candidate is exploiting for votes.

So far this site appears to be the only one to have actually examined the religious beliefs of the murder victims. And our analysis found that the claim of the shooter “targeting anyone who is religious” does not appear to hold up. Only two of the victims were confirmed Christians. One was an Agnostic, another a Pagan, and a third was apparently a secular Jew. The remaining four, amidst everything they did or did not put out there about themselves, gave no indication they wanted to be known publicly by any religious identity whatsoever. This must be respected. No one has the right to co-op our memories of the deceased and revise them to fit an agenda.

Did the shooter intend to “target” anyone who was religious?

The media has reported no first-hand accounts of the shooter treating people differently based on their responses to his questions about religion. Yet we do have first-hand accounts that he did not target people according to their religious beliefs. Shooting survivors Tracy Heu and Rand McGowan specifically reported they didn’t think the religious were targeted, as they were not treated differently depending upon their response. Anastasia Boylan and Kortney Moore reported only that the shooter asked about religion but did not specify whether he treated people differently depending on how they answered.

The conflicting accounts about Christians being treated differently came only second-hand and have not been confirmed by the actual witnesses. That lack of confirmation seems significant. One of those second-hand accounts came from Boylan’s grandmother, Janet Willis, but in Boylan’s own interview later, she did not make the claim. Given the great amount of interest in this point, one would think she’d have wanted to confirm it if it were indeed true. Another second-hand account comes from high-schooler Autumn Vicari about her older brother J.J., who escaped without injury. For whatever reason, there is still no reported interview with J.J. himself that might confirm or deny this.

The sheriff in charge of the response who has been relaying statements from families said he has not been informed of alleged religious targeting, either by families or survivors.

Was the shooter “an atheist”?

The shooter himself didn’t think so.

Much has been made, in the media and by Christians, of the gunman’s dating profile at “Spiritual Passions,” where he checked two boxes for his religious views: “Not Religious,” and “Not Religious But Spiritual.”

What has not been reported anywhere are the boxes he did not check. I had to sign up on that site to find this out, but it’s free and only took a few minutes. Here are the choices he had available to him:

The shooter could have checked boxes for “Atheist” or “Agnostic,” but he didn’t do that.

As for what he sought in his match, he checked “Pagan,” “Wiccan,” and “Not Religious, but Spiritual.”  This meant he wanted to screen out women who had checked “Atheist” or “Agnostic.” He wanted to date theistic women, not atheistic women.

The site also allows you to join groups that align with your beliefs. Again, much has been made of what he checked: “Magick and Occult,” “Left-Hand Path,” “Meditation,” “Not Religious But Spiritual,” and “Doesn’t Like Organized Religion.” But once again, no one has reported which groups he did not check. What were those options? 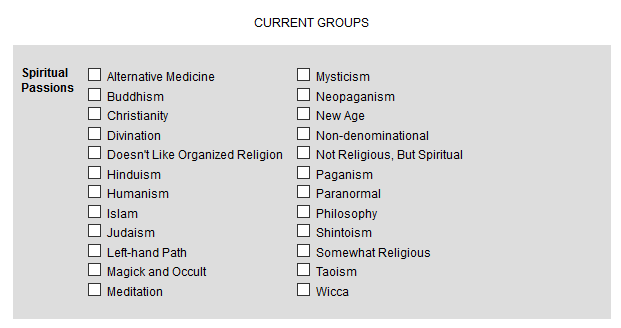 There are only two nontheistic groups on that list — only two that an atheist or Agnostic would be likely to check: “Philosophy” and “Humanism.” He checked neither.

Looking at all the available evidence, the gunman, at least at the time of this profile, was not an atheist.

Stelter may not be aware of the popularity among many theistic New Age followers and nondenominational Christians of language like “I dislike religion; I’m just spiritual and close to God,” or “Christianity is not a religion, it’s a relationship with God.”

Did the shooter believe in an afterlife, possibly contributing to his crime?

Let’s look at an angle of this story that no one else seems to have mentioned. Two survivors’ accounts suggest the shooter may have been asking about religion in order to reassure them they were about to meet God, which may, in some sick way, have made it okay to him. Survivor Ana Boylan said: “The shooter said that he would only feel pain for a couple of seconds and that he would be with God soon…” Rand McGowan’s mother Stephanie Salas relayed a similar observation from her son, that the shooter asked, “‘Do you have a God? Are you Christian? Do you have a religion?’ … it was like telling the victims ‘you’re going to be meeting your maker… this won’t hurt very long.’”

While it’s possible the gunman was being facetious, the witnesses don’t suggest that. Nor does his dating profile. There are reports that shortly before he committed suicide, he referred to meeting the victims in heaven. These have been dismissed by Christians as sick jokes.

But what if they weren’t jokes? What if the shooter’s belief that he would meet his victims in the afterlife contributed to making it easier for him to kill them? The point is, I don’t know why he spoke of religion and the afterlife, and neither do the Christians claiming they do.

So in every respect, Stelter’s statement “in fact, it seems he was an atheist who was targeting anyone who is religious” had factual problems. The evidence doesn’t support calling the gunman an atheist, it doesn’t support suggesting his intention was to target the religious, and it doesn’t support suggesting the murder victims were the more religious. It’s unfortunate that a show called Reliable Sources, with a normally credible host, contributed to the rumor mill with more rumors. Especially when introducing them with the announced goal of providing accurate information to counter misinformation.

(Image via YouTube. Thanks to our reader G. Earl for alerting me to the Stelter report)

October 6, 2015 John Kasich Tells Medicaid Opponents to Read the Bible
Browse Our Archives
What Are Your Thoughts?leave a comment