John Kasich was never going to be the Republican nominee for president. The Ohio governor is currently polling at the bottom of the pack alongside Mike Huckabee in the latest PPP poll, and his most recent maneuver probably won’t help. What’s his sin? Telling the Religious Right to read their bibles. 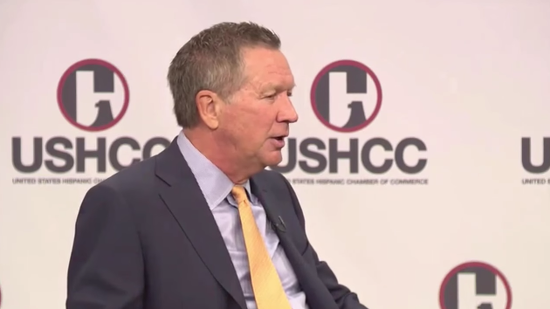 At an event hosted by the Hispanic Chamber of Commerce on Tuesday, Kasich defended the decision to expand Medicaid in his state under the Affordable Care Act by likening its necessity to fighting ISIS. He detailed his response to those who would criticize his decision by saying:

You know how many people were yelling at me? I go to events where people are yelling at me. You know what I tell them? I mean, God bless them, I’m telling them a little bit better than this. But I said, there’s a book. It’s got a new part and an old part. They put it together. It’s a remarkable book. If you don’t have one, I’ll buy you one. And it talks about how we treat the poor.

Kasich’s right about the Bible and the poor — there are far more verses about handling wealth and treating the poor than, say, homosexuality — but being right won’t help him here. The party he’s wooing is one that has tried unsuccessfully to repeal the Affordable Care Act no fewer than 56 times, one in which two of the other governors in the race have stumped on the fact that they turned down the same Medicaid expansion, one where 74% of likely voters in the early primaries are opposed to Medicaid expansion too and 77% hate “Obamacare,” and one where 57% of the primary voters also want to make Christianity the “national religion.”

And Kasich just told those Bible-thumping, healthcare-hating people to go back to Sunday School.

Being right is not going to save him from their indignation. Really, being right has very little to do with how GOP candidates poll anyway (See: Carly Fiorina and Donald Trump). But if Kasich was facing an uphill climb before, he might as well throw in the towel now.