Evangelist Wants to Know If You’d Say “Yes, I’m a Christian” with a Gun to Your Head October 6, 2015 Hemant Mehta

Evangelist Wants to Know If You’d Say “Yes, I’m a Christian” with a Gun to Your Head

Vertical-video-addict and Christian evangelist Joshua Feuerstein, last seen getting humiliated on national television, is back with his latest lie.

He believes all nine of the victims of the Oregon college shooting were Christian martyrs who died because they had the courage to admit their faith to the gunman. We’ve posted repeatedly about how that wasn’t the case at all. A couple of the victims were decidedly non-religious and the ones who were Christian did not appear to be killed because of their faith. None of that takes away from the tragedy of the situation, of course, but it’s a lie to claim this was an anti-Christian attack.

Not that Feuerstein ever cared about honesty. Christian persecution is his currency and he’s always cashing in. In his latest video, he asks viewers if they would have the courage to say “Yes, I’m a Christian” with a gun to their head. Because that’s how society works now. 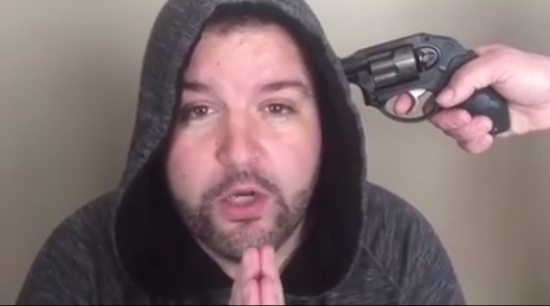 At least he’s not encouraging others to follow his lead… If you really want to show you care about the victims, he says, just share his video and use the right hashtag.

Also, I’m no gun expert here, but I’m pretty sure you’re not supposed to have your finger on the trigger when you’re playing around. Even if he’s using a fake in the video, it’s completely irresponsible.

It’s not the first time Feuerstein has included a weapon in his video to make a point. At least he didn’t drag his children into this one.

October 6, 2015 Dr. Ben Carson Explains His Delusional Hero Fantasy in the Event of a Mass Shooting
"I tried posting the image that you have and couldn't do it; are you typing ..."
democommiescrazierbrother Christian Nationalism Was Front and Center ..."
"Having lived in Canada after 2016 until 2020, this wouldn't surprise me.I would have guessed ..."
BeaverTales II - ✓ᵛᵉʳᶦᶠᶦᵉᵈ Update: Supreme Court Refuses to Hear ..."
"Hmmm, God and Devil. Good combo. I knew someone with the last name Schimpf. It ..."
kelemi Man Involved in MI Governor Kidnapping ..."
"Accidentally killed himself?"
kelemi Franklin Graham: The 10 Republicans Who ..."
Browse Our Archives
What Are Your Thoughts?leave a comment