How Religion and the GOP Have Hurt Those Who Need Mental Health Resources October 5, 2015 Lauren Nelson

The nation is still grappling with the events that transpired in Oregon last week. As we process the carnage, many reactions have been a rerun of the discourse seen after the other 294 mass shootings across the nation this year. Progressives cry out for better gun control (including, in this case, the shooter’s father). Conservatives have a collective freak out about the government coming for their guns. And politicians, uneasy with the rhetorical war surrounding them, err on the side of caution and point the finger at mental illness.

But despite their best efforts to keep post-tragedy focus on mental illness as the obvious cause, it’s not always the case. In fact, studies suggest that, most of the time, it’s not. As Dr. Jeffrey Swanson, a professor in psychiatry and behavioral sciences at the Duke University School of Medicine, explained last year:

A 2001 study looked specifically at 34 adolescent mass murderers, all male. 70 percent were described as a loner. 61.5 percent had problems with substance abuse. 48 percent had preoccupations with weapons; 43.5 percent had been victims of bullying. Only 23 percent had a documented psychiatric history of any kind — which means three out of four did not.

Studies like this frequently fall on deaf ears. It doesn’t matter that only 3-5% of individuals living with mental illness will ever participate in any kind of violent act. It doesn’t matter that the mentally ill are far more likely to be victims of violence than they are to be perpetrators. In the wake of a shooting, the age-old, inappropriate fear of the mentally ill is reinforced by linking them with incidents of mass violence. We decide political convenience is more important than the dangerous stigma it produces.

John Oliver had a scathing critique of this shameful trend last night, where he artfully highlighted the sordid history of mental health care in the U.S., the woeful state of those services today, and the solutions that could address the problems if only we’d allocate the resources to them. He called on the politicians so eager to point the finger at mental illness after a mass shooting to put their money where their mouth is and actually do something about the problem they so frequently lament. 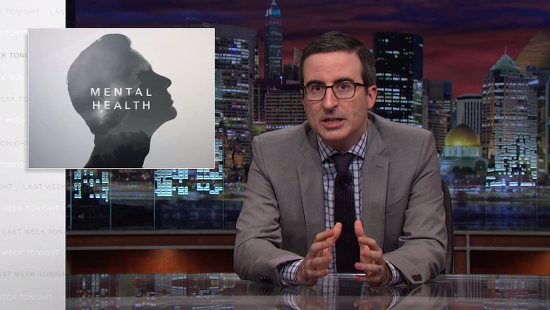 In short, he was on point. But there’s another part of this story we don’t discuss, a component so ingrained in our culture and history that its role in the problem cannot be understated: the significant influence of religious posturing on mental health issues.

Mistreatment of the mentally ill by religiously dominated societies has a long and horrific history. Early civilization almost universally attributed mental illness to a lack of faith or strength or punishment by the gods. This resulted in a patchwork quilt of approaches to treatment. Egyptians advocated for behavioral treatment, for example, and Hippocrates insisted disorders be treated rather than feared. But the most pervasive tactics involved “magic” and religious ritual. The culture created by these beliefs saw mental illness as shameful both for the afflicted and their families.

This stigma continued into the Medieval and Renaissance eras, though treatment became less and less humane. As churches took on more and more responsibility for the mentally ill, individuals suffering from disorders were frequently thrown into shackles and locked in dark dungeons. Such abuses would persist until the 1700s, when a wave of reforms began to be instituted across Europe.

Progress was made in the centuries to follow with the introduction of psychotherapy, medication, and electroshock therapy as forms of treatment. That didn’t mean the abuses went away. Particularly in the United States, isolation became the default treatment for mental illness, and by the mid-1960s, there were more than 560,000 individuals living in mental asylums. President John F. Kennedy would eventually take steps to close those asylums in hopes of transitioning treatment to community-based therapeutic treatment. It was well-intentioned, but the funds never came through to institute those supports.

As Oliver’s report indicates, the result has been nauseating. Individuals with mental illness are more likely to end up in prison than they are in treatment. But it’s not just the lack of funding and availability of resources that has led us to this point. Churches aren’t using iron shackles anymore, but their approaches to mental illness have crafted psychological restraints that keep many faithful from seeking out the help they need.

Religion continues to blame weak faith as the cause of mental illness, insisting greater devotion is the solution. A recent study found that 50% of Evangelical Christians believe mental illness can be treated by “prayer and Bible study alone.” Research from 2008 found that Evangelical Christians and Orthodox Jews are less likely to seek treatment and more likely to perpetuate the stigma against mental illness. These trends are even more pronounced within communities of color. The Journal of Muslim Mental Health found that immigrant practitioners of Islam overwhelmingly seek treatment from the family to avoid public shame, where that treatment is often nothing more than encouragement to “toughen up.” There are Christian extremists that go so far as to claim that psychiatry is “anti-Christian” or that “madness” is punishment for sin.

To be entirely fair, religious institutions in recent years have started to evolve on this subject, offering mental health resources and encouraging those with mental illness to seek help. (That particular initiative was started by Pastor Rick Warren‘s Saddleback Church.) Studies have also found that incorporation of faith in therapeutic approaches can be incredibly helpful for those who believe. But the culture created over millennia is not something undone overnight. Religion has played a major role in socializing stigma against mental illness in the U.S. Even the studies that say as much are likely underestimating the scope of the problem. After all, if mental illness is shameful or the result of poor faith, individuals are far less likely to cop to experiencing symptoms related to mental illness, which means estimates about those avoiding treatment are probably low.

It doesn’t help that conservative leaders have long propped up this cultural stigma with their rhetoric. Repbulican darling and family values champion Ronald Reagan associated psychiatry with Communism and decimated federal funding for mental healthcare. States have cut more than $1.6 billion in funding for mental healthcare since 2009 in efforts led by Republican governments. Despite their insistence that mental illness is a huge problem, Republicans have, time and time again, stood against programs that would make a difference. When they have advocated for legislation, it’s been counterproductive and dehumanizing to those suffering from mental illness.

We see the same stigma and ignorance in the GOP presidential field today. Mike Huckabee slammed the Supreme Court as “schizophrenic,” demonstrating that he doesn’t mind throwing the mentally ill under the bus to make a point and showing that he really has no understanding of what schizophrenia is. Rand Paul, a doctor, has argued that vaccines are linked to mental disorders, despite that being patently untrue. Ben Carson fell back on his career as a neurosurgeon to argue President Obama was clinically a psychopath. Ted Cruz has argued that we should be “going after” the mentally ill.

I’m not contending that these candidates are trying to pray away any afflictions they or their loved ones may have, physical or mental. But as they pander to an exceedingly religious base, their derisive comments toward the mentally ill, hollow platitudes, and budget cutting shenanigans are resonating. They serve to reaffirm the existing stigma in these communities.

So, yes, Oliver was right. The current U.S. mental health system is abysmal. It’s tragic that solutions are available but not leveraged. But as much as inadequate infrastructure is plaguing us, the cultural headwinds steeped in religion and affirmed by conservative politics may be the bigger hurdle. Given that this problem has persisted for hundreds and hundreds of years, the infuriating odds are that this won’t be changing anytime soon.

We’re in crisis here, and no amount of prayer is going to solve that.

October 5, 2015
Dozens of Ex-Jehovah's Witnesses Have a Message for Those Still Trapped in the Faith
Next Post

October 5, 2015 Mike Huckabee: I Oppose Silly Boycotts, and That's Why I'm Boycotting Rainbow Doritos
Browse Our Archives
What Are Your Thoughts?leave a comment