Yet Another Example of Jaclyn Glenn’s Plagiarism October 3, 2015 Hemant Mehta

Yet Another Example of Jaclyn Glenn’s Plagiarism

Yes, I’ve posted already about atheist YouTuber Jaclyn Glenn‘s plagiarism, but plenty of commenters are still unconvinced. And now there’s another example. So let’s give it another shot and then I’ll explain (again) why it matters.

The video below, by babbisp1, compares a video Glenn made in July of 2014 to an episode of The Atheist Experience filmed in December of 2010. Note how much her commentary resembles, or directly rips from, what host Matt Dillahunty is saying. 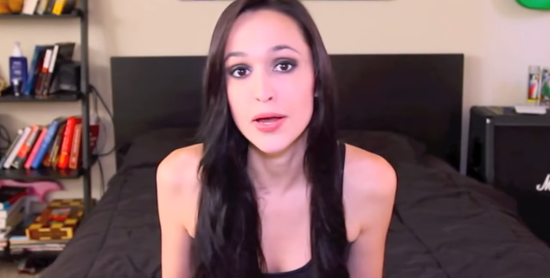 Dillahunty: I get my limits from a rational consideration of the consequences of my actions.

Glenn: My morality is based off of a rational consideration of the consequences of my action.

Dillahunty: … I was a Christian for 25+ years. I did not get smarter when I became an atheist. What happened was I gained more information. I became more knowledgeable about the subjects.

Glenn: I was religious for a large part of my life and I didn’t become smarter when I became an atheist.

Dillahunty: There have been multiple studies that actually investigate the correlation between the religiosity of a society and its societal health, and there is always a strong negative correlation. The more atheistic the society, the better they score on societal health factors from everything from teenage pregnancy rates to STDs to happiness to wealth to… murder, rape, to health care.

Glenn: Not to mention there have been several studies that look at the correlation between the religiosity of a society and its societal health. The more atheists, the healthier it is. I mean, from teenage pregnancy to STDs to rape to murder to health care. I mean, just look at the evidence.

Dillahunty: So the idea that secular morality offers no guarantee that people will ever pay for their crimes and their atrocities is not an argument against secular morality. Because that is a tenet of Christianity. It is the foundation.

Glenn: So the idea that secular morality is just a way out of being held responsible for your actions is completely ridiculous because that’s a tenant of Christianity.

That last exchange in particular made me laugh.

Because if you look carefully, Dillahunty described a core tenet, or belief, of Christianity: That accepting the divinity of Jesus absolves you of all sins.

That’s not exactly what Glenn said.

I can’t get inside her head here, but here’s what I think happened: She’s unfamiliar with the word “tenet.” It’s not a word she would use on her own. But since she was plagiarizing what Dillahunty was saying, and passing off his words as her own, she took that word along for the ride. But she was sloppy and ended up saying “tenant.” (Which I guess means Christianity is a landlord or something.)

It’s similar to a mistake other plagiarists sometimes make when they copy/paste information from another source and include all the spelling and grammar mistakes that were in the original. It’s a smoking gun of sorts. It’s a YouTube version of cdesign proponentsists.

Why is all this a problem? Because it’s very clear Glenn took her information and ideas (not to mention many of the exact phrases) straight from Dillahunty’s mouth.

But nowhere in the description or the video itself — which has more than 228,000 views — is any credit given to him or The Atheist Experience. If you watched her video, you’d wrongly assume she wrote the material herself. She clearly didn’t. She’s making money on her channel from the work of other people without giving them proper credit for it or even getting their permission in advance. That’s why this is a serious problem. The fact that it’s happening on YouTube and not, say, an academic book is irrelevant.

I asked Dillahunty what he thought about all this and this is what he told me:

I’ve told people to freely use things I’ve said if they find them useful. I’m not bothered that someone echoed my remarks and I’m not bothered if I’m occasionally misquoted or quoted without citation, but it’s just a bit shocking and frustrating to see repeated instances of someone representing the thoughts of others as their own in such broad, clear strokes.

How many of these videos do I need to post before it’s clear that this is unacceptable behavior for someone who, like me, makes her living online? I’m not asking her to stop making videos. I think she has a unique ability to draw in a lot of viewers that people like me or [insert any other atheist’s name here] could never reach. All she has to do is properly acknowledge if the basis for her video originated in someone else’s head. If she’s directly quoting from another source, she should say so.

In the video above, all she would’ve had to do to avoid accusations of plagiarism is admit that she’s quoting the ideas and words of Dillahunty and provide a link to The Atheist Experience‘s video so her viewers can check it out for themselves. That’s not asking much. It’s the least she could do considering the mileage she’s getting out of other people’s material.

(Thanks to @SNTPurdue for the link)