Two weeks ago I reported on a sweeping program of organized religious coercion of student athletes by their Christian coaches at public high schools across southwestern Virginia. Since then I’ve received reports of two more schools involved, bringing the total number we know to host this program to twelve:

The preacher reads “The Competitor’s Creed” from the back of the book he holds, God’s Game Plan: The Athlete’s Bible:

I am a member of Team Jesus Christ… I do not trust in myself… or believe in my own strength. I rely solely on the power of God… I submit to God’s authority and those he has put over me. I respect my coaches… My body is the temple of Jesus Christ… Nothing enters my body that does not honor the Living God… My sweat is an offering to my Master. My soreness is a sacrifice to my Savior.

The preacher is a representative of the national organization Fellowship of Christian Athletes (FCA). Group leaders estimate that they’ve proselytized to some 10,000 high school football players in Virginia in their “Watermelon Ministry”… The Watermelon Ministry, which appears to have started around 2006, has been hosted by Christian coaches in at least ten public schools in southwestern Virginia.

I’ve since discovered several videos online, posted by a photographer for the FCA, showing just what goes on at these sessions.

In one shot this past August at Patrick Henry High School in Roanoke, we see what appears to be the entire football team of about 70 boys in practice uniforms, crouched in the scorching summer sun with three coaches standing behind them, being aggressively lectured by a bible-toting FCA representative.

In another version of the same event, at 3:20, we see how the hot, thirsty and tired players had to listen to the sermon before getting their cold watermelon.

In a third video, other area public high school coaches at a 2015 FCA conference discuss their goals of evangelizing the students under their authority with FCA’s help. Here are excerpts from the sermon to the football team:

The final key as far as being a great football player is you’d better have faith, you’d better believe… Thanks be to God for the victory He gives us through our Lord Jesus Christ…

I don’t know how many of you guys here pick this up very often, but this is the Bible, it’s God’s Word here.  If we want to  know truly what it is we need to do you got to get in and read it, because that will tell you what the words are that ought to be coming out of your mouth… that Word of God is going to direct you in the right way.

God’s good truth beats lies. You can throw this away in a heartbeat if you listen to the lies that the world has for you.  Don’t do that. Ground your life in the truth that’s in God’s Word… we gotta have faith, we gotta believe… If we’re willing to humble ourselves, give our lives to Him,  get into His word, God will do some amazing things with you.

My previous story described letters from the Freedom From Religion Foundation (FFRF)  sent on Sept. 17 to the two largest Virginia jurisdictions involved:

This predatory conduct is inappropriate and should raise many red flags.

It is well settled that public schools may not advance or promote religion. Courts have consistently held that it is illegal for a public school to include religious content in school events, including events taking place outside of the regular school day…

Allowing representatives of religious groups regular, or even one-time, access during a school activity to proselytize and recruit students for religious activities is a violation of the Establishment Clause. The courts have protected public school students from overreaching outsiders in similar situations…

[The schools] cannot allow non-school persons to treat school football practices as a recruiting ground for their religious mission. It demonstrates an unlawful preference not only for religion over non-religion, but also Christianity over all other faiths. Public schools have a constitutional obligation to remain neutral toward religion. When a school allows an adult FCA representative to preach to its students on the field during practice (or immediately following practice), it has unconstitutionally entangled itself with a religious message — in this case, a Christian message. Given the approval by coaches of the speaker, players will absolutely perceive that this is a school-sponsored activity. This alienates those non-Christian students and parents whose religious beliefs are inconsistent with the message being disseminated by the school.

Public schools have an obligation to remain separate from religion because “the preservation and transmission of religious beliefs and worship is a responsibility and a choice committed to the private sphere”… Students are young, impressionable, and vulnerable to social pressure, particularly pressure exerted from an adult. This program usurps the authority of parents…

[The schools] must immediately discontinue allowing Mr. Soltis or any other religious leaders access to students during school activities, including football practices. Please inform us promptly in writing of the steps you are taking to ensure that these constitutional violations are not allowed to continue.

“Roanoke County Schools believes in the separation of church and state,” Superintendent Greg Killough said. “We want to maintain and ensure that that practice is being followed.”

“When this information came to our attention, we responded immediately,” according to a Roanoke City Public Schools statement issued by spokesman Justin McLeod. “We met with the appropriate people and made it very clear that separation of church and state is the law of the land. We feel the matter is under control and we will monitor this very closely.”

That’s a great response and should certainly inspire more of us to report constitutional violations in our schools. The Fellowship of Christian Athletes was a bit less inspiring in its response:

Soltis referred questions to the group’s national office, which offered a statement through its media office: “Every student athlete has the right and the freedom to participate in activities according to their individual religious convictions. There are no repercussions for students who decline to participate in FCA activities.”

No one who sees that video above could reasonably imagine there would be no repercussions for a lone student or two who might dare to walk away from that scene. Such students risk losing their coaches’ favor, not to mention positive references that could be crucial for their college or professional aspirations. And we all know how harmful the social and psychological stigma can be against young teens who are viewed by their peers as outsiders.

Assuming this is the full text of FCA’s response, it’s also interesting what they don’t say. They don’t attempt to claim it was student-organized rather than coach-organized; the accounts I posted in my previous article make that excuse impossible. They don’t acknowledge a student’s right to be free from religious pressure by school authorities at official school events. They don’t clarify whether the students understood they were free to walk away from what would almost certainly have felt like a requirement if they want to remain on the team.

The Roanoke Times story reports that FFRF “was concerned that students potentially were forced to listen to a Christian message in a setting that is supposed to be neutral,” and quotes FFRF attorney Patrick Elliott who sent the letters:

“They’re being plied, almost like a literal carrot-and-stick approach, to receive this religious message,” Elliott said. “It really does hit at the heart of the First Amendment.”

Elliott said he was happy to hear the schools stopped the practice, and hoped they would continue to monitor the situation.

“We really want the school districts to educate their employees about what kind of conduct is allowed,” he said.

Districts should ask their employees how they’d feel if this was the scene that coaches were subjecting their players to on the practice field: 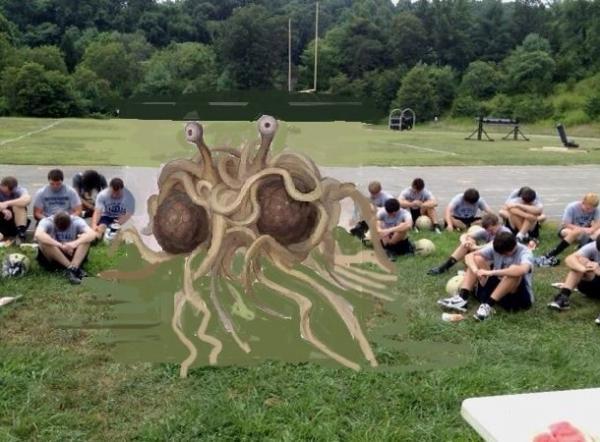