Before You Claim the UCC Shooting Was About Christian Persecution, Consider All the Evidence October 2, 2015 Lauren Nelson

Before You Claim the UCC Shooting Was About Christian Persecution, Consider All the Evidence

Another day, another shooting spree in the U.S.

In a tragedy that has become all too common in the states, 26-year-old Christopher Harper Mercer opened fire yesterday on Oregon’s Umpqua Community College campus armed with several handguns and one long gun. The most recent reports indicate that ten people lost their lives and many more were injured. While much of the response was predictable and repetitive — promises of prayers, political battle cries from both sides of the aisle regarding gun control, etc. — there is one specific detail of the story that has featured prominently in media coverage across the board. As the Washington Post reports, Mercer may have been targeting Christians explicitly: 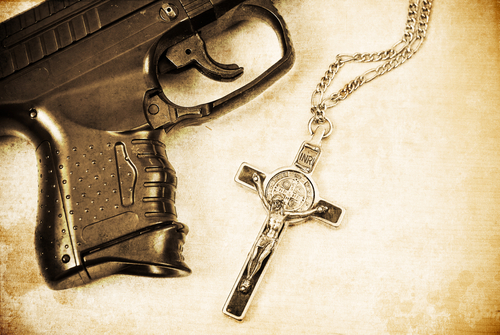 In one classroom, he appeared to single out Christian students for killing, according to witness Anastasia Boylan.

“He said, ‘Good, because you’re a Christian, you’re going to see God in just about one second,’” Boylan’s father, Stacy, told CNN, relaying his daughter’s account while she underwent surgery to treat a gunshot to her spine.

“And then he shot and killed them.”

Another account came from Autumn Vicari, who described to NBC News what her brother J.J. witnessed in the room where the shootings occurred. According to NBC: “Vicari said at one point the shooter told people to stand up before asking whether they were Christian or not. Vicari’s brother told her that anyone who responded ‘yes’ was shot in the head. If they said ‘other’ or didn’t answer, they were shot elsewhere in the body, usually the leg.”

As members of the media and armchair detectives scrambled to learn more about the man with an axe to grind with Christians, another tidbit came to light that seemed to solidify this story as one of Christian persecution. On a free dating website called Spiritual Passions, Mercer identified himself as “Not Religious, but Spiritual” on his profile. He was also listed in a group on the site called “Doesn’t Like Organized Religion.” As the profile made the rounds last night, the dominant narrative was that an atheist had targeted Christians in an act of terrible violence.

But is that really why Mercer did what he did? That question may seem scoff-worthy on face, but given the influence of such events on cultural and political conversation in this country, its consideration is not without merit.

We’ll put aside for the moment that the only stories supporting this theory have been secondhand accounts relayed by shaken up loved ones of survivors. We’ll look past the fact that the memories of trauma survivors are often unreliable, and that similar stories in the past — such as the alleged martyrdom of Cassie Bernall at Columbine — have been discredited because of that very problem. For the moment, we’ll give folks the benefit of the doubt and assume that Mercer really did ask people whether they were Christian before attacking.

There are still major problems with the atheist-persecuting-Christians narrative.

Right out of the gates, let’s address the insistence that Mercer was an atheist, a contention largely based on his dating profile. There is literally no basis for that argument. For starters, Spiritual Passions is not an atheist dating site, as many have claimed; they cater to a wide variety of believers who identify as spiritual. On their homepage, they describe themselves as:

A free online dating & social networking site specifically for spiritual singles. While the term ‘Spiritual’ means different things to different people, anyone who identifies as spiritual is welcome here. Whether you view your spirituality as a way of defining your religion, or as way of defining yourself outside of organized religion, you can find others here, who share similar points of view. We welcome members identifying with Buddhism, Christianity, Judaism, Mysticism, Taoism, Wicca, as well as those who are Non-denominational and those Not Religious, But Spiritual, Sign up now to enjoy free spiritual chat, message boards and email.

Nothing about this site screams “atheist.” But beyond the actual purpose of the site, Mercer does not describe himself as an atheist at all. While he was no fan of organized religion, he still identified as spiritual. This was not some atheist on a killing spree.

But just because he was on a site that served as a safe haven for spiritual people seeking romance doesn’t mean he didn’t have a bone to pick with the religious. If the stories are to believed, Mercer — atheist or not — was obviously targeting Christians, right?

That might be true. But unlike the Charleston shooting, there is no manifesto or obvious ideological commitment that universally points to a single motivation. As such, we’re left to reconstruct his worldview from the clues that he left along the way. We may never have firm answers… but a review of the hints he left point to much different conclusions than an anti-Christian agenda.

Frankly, the most consistent thing about his digital footprint is glorification of violence.

First off, Mercer did not ascribe to any formal religion, but his dating profile did link him to the occult and the “left-hand path.” This combination is most frequently associated with “dark magic,” with a heavy emphasis on rejecting moralism and social convention while engaging the taboo. Are all practitioners of the occult (or even the left-hand path) violent? Of course not. But the rejection of moralism combined with the “dark” associations do propose a world in which violence is acceptable. There’s a reason right-hand practitioners view left-hand adherents as evil.

So was this a “Satanist” attacking Christians? Even that doesn’t make much sense. He might not have called himself a Christian, but he was a proponent of groups who committed atrocious acts in the name of God. His email handle and frequent username was “ironcross45” — a reference that is most commonly associated with a war medal issued during WWII by the Nazis, whose belief in Christian dominance was well-articulated by Hitler himself. His MySpace page was littered with videos and propaganda supporting the IRA — the Catholic paramilitary group that used terrorist tactics to obtain Irish independence from Britain.

The fact that he was a fan of two groups that used Christianity to justify murder doesn’t quite fit the story of a young man persecuting Christians, but it does lend credence to a different theory: that Mercer was a young man obsessed with violence.

Even when you take faith and religion out of the mix entirely, Mercer’s online personas were fascinated with high-profile shootings. His recent activity on the Kick Ass Torrents website involved uploading a video about Sandy Hook shooter Adam Lanza. He publicly praised Roanoke TV gunman Vester Lee Flanagan in a blog post, urging viewers to go check out the “good” footage on YouTube before romanticizing the status of such shooters, stating:

On an interesting note, I have noticed that so many people like him are all alone and unknown, yet when they spill a little blood, the whole world knows who they are. A man who was known by no one, is now known by everyone. His face splashed across every screen, his name across the lips of every person on the planet, all in the course of one day. Seems the more people you kill, the more your’re in the limelight.

This was a guy fixated on acts of mass violence. Given that his religious preoccupation was as focused on destruction as these missives, it’s not really that questionable to argue this wasn’t about Christian persecution at all, but yet another example of Mercer’s twisted worldview.

To be fair, his motivation could also be far more specific. The night before the shooting, an anonymous user posted on the /r9k/ board on 4chan, warning those in the Northwest not to go to school the next day. Some users advised him to be careful not to alert the authorities about his intentions via online activity, and when news of Mercer’s attacks broke yesterday, the thread spread rapidly. Though the post has not been confirmed as Mercer’s, 4chan users are largely convinced that it was. 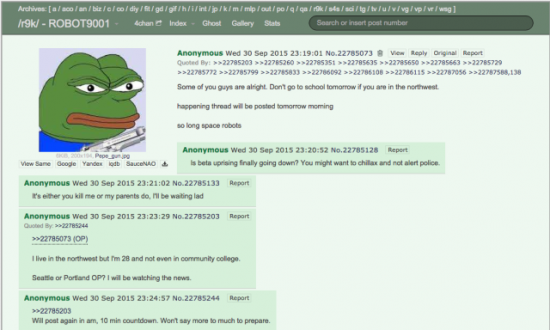 There’s an even more insidious twist to that 4chan post, though. You might notice the poster’s use of “Pepe the Angry Frog” and the subsequent replies referencing “beta uprising.” If you’re unfamiliar with the culture of these message boards, that might not mean much to you, but this specific combination signifies subscription to an ideology that believes the sexual revolution created feminists who were only attracted to so-called “alpha males,” leaving betas out in the cold (and rather bitter). The “uprising” is the idea that once the “betas” collectively realize this “inequity,” they will rise up and restore the balance. The attitude in this cultural cesspool is that men are owed sex, and when it’s denied to them, it’s because women are the problem. On /r9k/, such perspectives are par for the course.

Think the 4chan thread and its location are a weak link to such ideology? Consider the fact that Mercer described himself as an “involuntary virgin.” Consider the fact that this is the same guy who wished people a “happy Elliot Rodger day” in reference to the misogynist’s shooting spree in 2014. There’s much more evidence pointing to the idea that this shooting had something to do with a self-identified beta male trying to claim dominance over mainstreamers he perceived as alpha males or cruel females than anything involving atheism.

Even if you don’t think these were the actions of an incredibly violent man or a man fixated on rectifying some imaginary gender inequity, it still doesn’t mean this was Christian persecution. As is the case with most tragedies like this, there is the ever-present spectre of mental illness in the background. While mental illness does not make people inherently dangerous, and the assumption that mental illness is to blame for all such acts of violence is offensive and damaging, this is one instance where mental illness likely did play a role in the shooter’s decisions.

As the New York Times reports, former neighbors recounted stories about the mother going door to door with noise and pest complaints, explaining that her son had “mental issues” that necessitated consideration and action. Other neighbors recalled Mercer’s reclusive nature, punctuated by angry and disproportionate outbursts as he aged. While the full history of his mental health has not yet been disclosed, his history and mother’s own admissions suggest that something was wrong.

The point? There’s a lot more to this than the anecdotes about Christian targeting suggest. Combine mental illness with what we’re learning about his violent ideologies and you’ve got a recipe for disaster that has nothing to do with religious persecution.

Based on what we’ve learned so far, blaming his supposed atheism requires acceptance of a lot of flimsy evidence, while other possible motivations are readily available.

Let’s be clear: what happened in Oregon yesterday is incredibly tragic. Yes, let’s mourn the lives lost and celebrate those who showed courage under fire. But before you assert that this is somehow proof of some contrived “War on Christianity,” you’d do well to take a step back and take a look at the whole picture. This isn’t the smoking gun you thought it was.