We’re all aware by now that law enforcement officials across the country are putting “In God We Trust” stickers on patrol cars (because, they say with a straight face, it’s our national motto and it absolutely has nothing to do with Christianity).

But in July, the Houston County Sheriff’s Office in Dothan, Alabama took it way over that line. The stickers on their vehicles directly quoted the Bible. 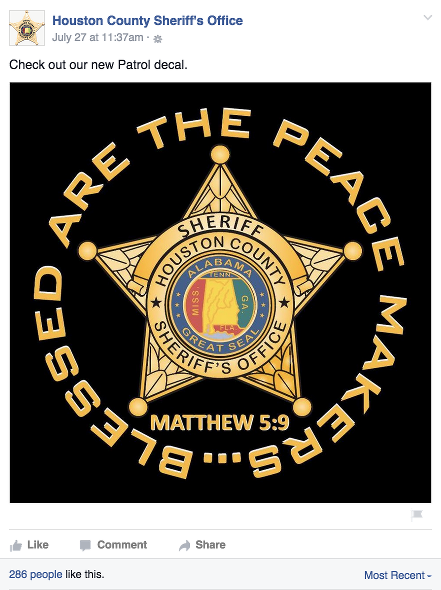 Sheriff Donald Valenza bought the $1.60 decals reading “Blessed are the peacemakers” and “Matthew 5:9” to put on the county’s cars. Whether the money was donated or came out of the department’s budget is irrelevant since the only purpose of the stickers was to promote Valenza’s faith:

“I’ve always had religious belief, and I feel like that’s kept me alive,” Valenza said. “We’ve used that (quote) with (the special response team) for 15 years. It symbolizes the Houston County Sheriff’s Office.”

“We have strong beliefs,” he said.

As I said before, he has strong beliefs. But his department has no beliefs.

Houston County Administrator Bill Dempsey said a recommendation was made Tuesday to the Houston County Sheriff Donald Valenza to remove the decals. Valenza declined to comment based on his attorney’s advice.

Dempsey said county officials spoke with a local attorney along with the county’s insurance carrier and learned if the county did not remove the decals they could face expensive legal fees.

“Of course neither the commission or anyone here supports that request, however we contacted our liability insurance carrier and their attorneys said if we take this to court they said we’re going to lose,” Dempsey said. “The county would be looking at hundreds of thousands of dollars in legal expenses.”

To paraphrase, Dempsey and other county officials were perfectly happy breaking the law and alienating non-Christians in the community, but those angry atheists with their annoying “Constitution” ruined all the fun.

Too damn bad. Dempsey should be thanking Americans United for letting him not be the bad guy.

They are not taking this news very well at the “I support Blessed Are The Peace makers on the Houston county sheriff cars” Facebook page.

***Update***: I neglected to mention that the Freedom From Religion Foundation also sent a letter urging the department to reconsider the decals.